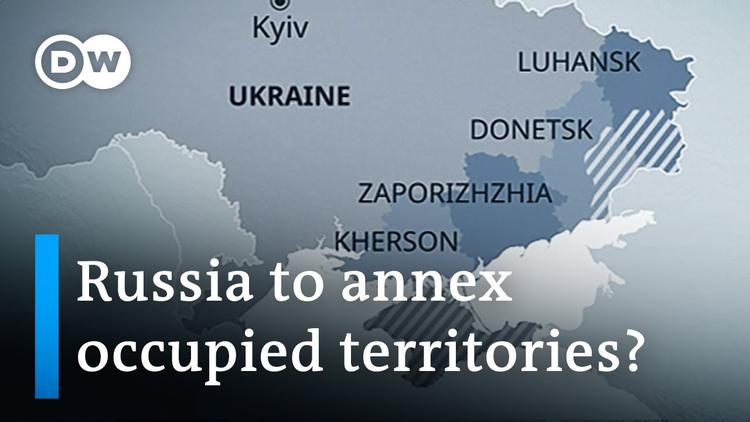 28 Sep 2022 – In a further sign that all irony is dead, the Israeli Foreign Ministry rejected the annexation of four Ukrainian districts by Russia yesterday saying that Israel “recognizes the territorial integrity and sovereignty of Ukraine, and will not recognize the results of the referendums in its eastern districts.”

Yesterday, the Russian Federation carried out phony “referenda” in the four Russian-occupied regions of Donetsk, Luhansk, Kherson and Zaporizhzhia. At the same time, heavy fighting raged in Donetsk and Kherson in particular between Ukrainian troops, who had made progress in recovering some of this territory for Ukraine, and Russian forces attempting to push Ukraine back out.

Amazingly enough, in all four referenda over 90 percent of votes supported the option of annexation to Russia. I am, of course, being sardonic. The vote was corrupt, as most referenda conducted by authoritarian states are. Since there is no alternative offered on the ballot, it is impossible for a referendum to lose. Compared to what?

It is illegal in international law, including the charter of the United Nations, for one country to detach territory from another by aggressive warfare. The diplomats who negotiated this rule in 1945 were attempting to ensure that no further global conflagrations such as World War II could break out. Vladimir Putin in Ukraine has mounted the most serious challenge to this international norm in post-war Europe. It is even worse than George W. Bush’s Iraq War, since there was never any question of the United States dragooning Basra into being the 51st state of the union. The Iraq War was an illegal, aggressive war, but it was not annexationist, which is even worse.

Israel has steadfastly refused to join the US-led boycott of the Russian economy, maintaining fair relations with both Moscow and Kyiv — though Ukrainian President Volodomyr Zelensky has chewed out the Israelis in private phone calls for refusing to supply Ukraine with anti-aircraft batteries. So to offset the help Tel Aviv is giving to Putin’s war effort by dealing with Russia economically, the Israeli government has occasionally criticized the Russian invasion of Ukraine. But that is all, it is just a matter of some mild rebukes at international fora. The rejection of Russian annexation of the four districts is another of those attempts to appease Washington while not actually doing anything practical for President Joe Biden’s effort to get Russia back out of Ukraine.

I say irony is dead because Israel is among the worst actors in defying the norms of international law when it comes to gobbling up other people’s land.

In 1980, Israel annexed parts of the Palestinian West Bank to its district of Jerusalem, including Palestinian East Jerusalem. I can’t tell you how illegal this was. Even the US was so angered that it declined to exercise its veto when the issue was considered by the United Nations Security Council. The UNSC issued a caustic rebuke of Israel in the form of Resolution 478:

Recalling its resolution 476 (1980),
Reaffirming again that the acquisition of territory by force is inadmissible,
Deeply concerned over the enactment of a “basic law” in the Israeli Knesset proclaiming a change in the character
and status of the Holy City of Jerusalem, with its implications for peace and security,
Noting that Israel has not complied with resolution 476 (1980),
Reaffirming its determination to examine practical ways and means, in accordance with the relevant provisions of
the Charter of the United Nations, to secure the full implementation of its resolution 476 (1980), in the event
of non-compliance by Israel,
1. Censures in the strongest terms the enactment by Israel of the “basic law” on Jerusalem and the refusal to
comply with relevant Security Council resolutions;
2. Affirms that the enactment of the “basic law” by Israel constitutes a violation of international law and does
not affect the continued application of the Geneva Convention relative to the Protection of Civilian Persons in
Time of War, of 12 August 1949, in the Palestinian and other Arab territories occupied since June 1967, including
Jerusalem;
3. Determines that all legislative and administrative measures and actions taken by Israel, the occupying Power,
which have altered or purport to alter the character and status of the Holy City of Jerusalem, and in particular
the recent “basic law” on Jerusalem, are null and void and must be rescinded forthwith;
4. Affirms also that this action constitutes a serious obstruction to achieving a comprehensive, just and lasting
peace in the Middle East;
5. Decides not to recognize the “basic law” and such other actions by Israel that, as a result of this law, seek
to alter the character and status of Jerusalem and calls upon:
(a) All Member States to accept this decision;
(b) Those States that have established diplomatic missions at Jerusalem to withdraw such missions from the Holy
City;
6. Requests the Secretary-General to report to the Security Council on the implementation of the present
resolution before 15 November 1980;
7 Decides to remain seized of this serious situation.

Adopted at the 2245th meeting by 14 votes to none, with 1 abstention (United States of America).

I guess the Israelis thought they were on a roll, so in 1981 they formally annexed the Golan Heights from Syria. The Israeli press tells a sob story about how they were shelled from the Golan in the 1960s, but interviews given with former Israeli military men and politicians make it clear that they wanted the Golan right from the beginning and that they initiated the shelling contest with Syria in the mid-1960s to establish a pretext for grabbing it, which they did in the 1967 war. Again, acquiring the territory of your neighbor by warfare is not allowed in international law.

Lo and behold, the UNSC was again livid:

Having considered the letter of 14 December 1981 from the Permanent Representative of the Syrian Arab Republic
contained in document S/14791,
Reaffirming that the acquisition of territory by force is inadmissible, in accordance with the Charter of the
United Nations, the principles of international law and relevant Security Council resolutions,
1. Decides that the Israeli decision to impose its laws, jurisdiction and administration in the occupied Syrian
Golan Heights is null and void and without international legal effect;
2. Demands that Israel, the occupying Power, should rescind forthwith its decision;
3. Determines that all the provisions of the Geneva Convention relative to the Protection of Civilian Persons in
Time of War, of 12 August 1949,” continue to apply to the Syrian territory occupied by Israel since June 1967;
4. Requests the Secretary-General to report to the Security Council on the implementation of the present
resolution within two weeks and decides that, in the event of non-compliance by Israel, the Council would meet
urgently, and not later than 5 January 1982, to consider taking appropriate measures in accordance with the
Charter of the United Nations.

Adopted unanimously at the 2319th meeting.

Israel also annexed the Shebaa Farms from Syria, most of the land in which was owned by Lebanese Shiites. This annexation sparked the disastrous 2006 war launched by Israel on little Lebanon when Hezbollah, the Shiite party-militia, engaged in military actions aimed at reclaiming the Shebaa Farms.

Former Prime Minister Binyamin Netanyahu pushed for annexation of “Area C,” a wide swath of Palestinian territory in the West Bank, in 2017.

So it is pretty rich for the Israeli foreign ministry to now say that Russia shouldn’t be annexing land from its neighbors. That is about the least credible rebuke of Russia’s actions you could imagine on the world stage.