The Bottomless Pit of War Spending

23 Oct 2022 – The European Union is giving Ukraine €5 billion in exceptional macrofinancial assistance. Another 9 billion has been provided by the EU-sponsored fundraising campaign. However, this is not enough to cover the budget hole; Zelenski is immediately asking for another 55 billion euros. The US and EU have already donated 100 billion euros in military supplies to Kiev. 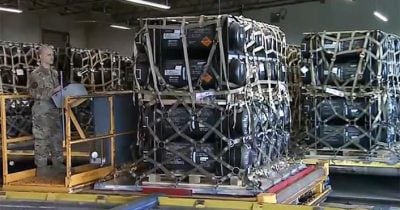 US Weapons to Ukraine – InfoBrics

Add to that billions more spent by the EU on training and arming Ukrainian forces, plus those spent for the same purpose by individual EU countries. In the U.S., a bill is passing in the Senate that allows the Pentagon to purchase, without specific congressional authorization, huge quantities of weapons for Ukraine directly from the war industries-a colossal business for the military industrial complex, which will further increase its profits with NATO’s Ten-Year Plan to arm Ukraine by repurposing its war industry.

These huge funds, coming directly and indirectly from our pockets, serve to fuel the war in the heart of Europe. The risks are growing. The NATO nuclear war exercise directed against Russia is taking place in Europe: 14 countries are participating under U.S. command with 60 aircraft, including F-35 nuclear attack fighters, including Italian ones, which will soon be armed with the new U.S. B61-12 nuclear bombs, and U.S. B-52 strategic bombers armed with nuclear cruise missiles.

At the same time, the most important strategic report released in recent days by the White House-“U.S. National Security Strategy”-leaves no doubt about Washington’s pursued goal: “Around the world, the need for American leadership is greater than ever. Our armed forces are the strongest the world has ever known. America will not hesitate to use force when necessary to defend our national interests.”