FTX: The Joke of Democracy

15 Nov 2022 – From its founding in 2017, the one-man company rose to a “partner organisation” of the WEF and second largest donor to Biden and the Democrats’ mid-term election. It has now gone completely bust, taking every penny of its depositors’ money with it.

This is what I think of as a signpost article – it points you to something the mainstream media is deliberately not giving the prominence it needs, but I have no personal expertise or inside knowledge to give you. I am just giving you a start to get going. Several readers will have a much better understanding than I, and I encourage you to give your thoughts in comments below.

It is also worth noting that only the immediate improvement to freedom of speech on Twitter by Elon Musk has brought this to my attention. Several sources – particularly Citizens for Legitimate Government – have suddenly appeared in my feed again after being entirely suppressed.

My own tweets are, for now, less suppressed – my own family have been receiving notifications from me after they were stopped for over a year. I am not in general a fan of billionaires like Musk, and I do not know where Twitter will settle, but there is undoubted initial improvement.

The FTX story seems truly remarkable. From being founded only in 2017 it rose to be a “partner organisation” of the World Economic Forum and the second largest donor to Biden and the Democrat’s mid-term election campaign. It has now gone completely bust, taking every penny of its depositors money with it.

That is some trajectory.

The World Economic Forum has deleted its FTX page, but the Wayback machine has it: 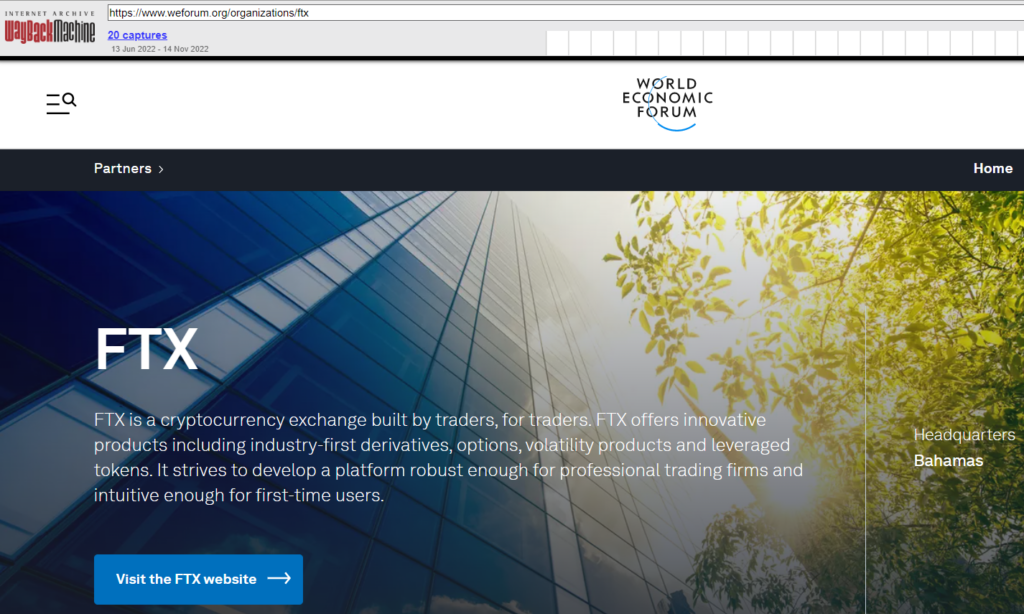 I suppose it is inevitable that dodgy chancers would create derivatives markets for gambling on crypto, but I confess I had not given the matter much thought. It goes without saying that in those five years the founder of FTX had managed to take a huge personal fortune out of the company before it went bust.

FTX was a one man company belonging to Sam Bankman-Fried. The board consisted of him, an employee and the company lawyer. Over US$20 billion of investors’ funds from FTX were funneled to a fund management company, Alameda Research, also owned by Sam Bankman-Fried.

$37 million was donated by Bankman-Fried to the Democrats for the 2022 elections. Every penny of that originated with duped FTX investors. That is in addition to the $5 million given to the Biden 2020 campaign. FTX, of course, crashed instantly after those mid-term elections, which is interesting timing.

The BBC and the Guardian were constantly bombarding us with the term “democracy denier” in their coverage of the US elections, strangely not in reference to Hillary’s ludicrous claims that Russian interference was the cause of her loss in 2016.

I view as a joke any notion that the USA is a democracy. Democracy is about giving citizens a choice of political direction. The 2022 elections saw a simply incredible campaign spend of US$ 9.7 billion. Yes, nearly ten billion dollars. This is not democracy, it is a huge exercise in corporate control from which the ordinary citizen is frozen out.

Despite an aggressive tribalism which has stalemated the political system for decades, the difference in policy platform between Democrats and Republicans is highly marginal, with no alternative on offer to rampant and uninhibited commercial exploitation of the population by the super-wealthy.

The Democrats are marginally more keen on attacking other countries; the Republicans are marginally more against measures to curb carbon emissions. Vaunted differences on immigration and welfare turn out to be very small indeed, with very little changing when the White House does.

American elections are simply about the super rich funneling in vast donations, expecting to benefit when their team gets its nose in the trough, or often donating to both sides to benefit either way.

I am not sure what the connection to democracy is supposed to be.

One simple fact illustrates the true nature of the bribery fest. By far the majority of the funds channeled through Political Action Committees (PACs) are given to incumbents who face no serious threat to re-election anyway. The PAC’s are interested in bribing those in power, not changing those in power. They are simply lobby groups with an opportunity for legal bribery. To illustrate that, the largest donating PACs are:

It is worth noting that Bankman-Fried donated ten times as much as the largest PAC donation. This brought access – he and his brother had meetings inside the White House on 7 March, 22 April and 12 May.

It is perhaps unsurprising therefore that FTX was involved in Ukraine, offering to exchange cryptocurrency for fiat and send it to Ukraine in an official partnership with the Ukrainian government. This from their press release

Aid For Ukraine is cooperating with the cryptocurrency exchange FTX which converts crypto funds received into fiat and sends the donations to the National Bank of Ukraine. This marks the first-ever instance of a cryptocurrency exchange directly cooperating with a public financial entity to provide a conduit for crypto donations. Earlier this month, FTX already converted $1 million worth of SOL and transferred it to the National Bank of Ukraine.

The collapse of the Bankman Fried scam was allegedly caused by hackers stealing what should have been a comparatively small portion of the assets of FTX, had they not been hived off elsewhere. Doubtless we will shortly hear from state salaried conspiracy theorists that this was Russia/Guccifer/an ISP address traced by Bellingcat to inside the Kremlin.

What we really have here is an Allen Stanford for 2022, with added political connections.

We would do well to heed the advice of crypto developer Nikolai Mushegian, who had as his Twitter profile: “Larpers who self-style as CEOs or CTOs or VCs are a bigger problem than the establishment. They can’t build anything and will sell you out in 2 seconds.”

CIA and Mossad and pedo elite are running some kind of sex trafficking entrapment blackmail ring out of Puerto Rico and caribbean islands. They are going to frame me with a laptop planted by my ex gf who was a spy. They will torture me to death.

The next day he drowned in the sea off a beach in Puerto Rico, where he lived. He was fully clothed including a jacket. The police are not treating it as homicide so presumably their theory is suicide by wading out to sea.

States of course have a massive incentive to destroy non fiat currencies, or convert them into a new category of regulation. I am interested in the current discussion on smart state digital currencies where the state can track, control and block any transaction and know in real time exactly where each citizen or entity is spending or keeping every penny.

It occurs to me this is the wrong way round. The state belongs to its citizens, not the citizens to the state. We should be able to track online every single penny of public money in real time and see how it is spent. Imagine being able to follow every penny of the billions the Tories spent on fraudulent PPE contracts, for example.

The only people whose personal currency should be able to be tracked are those who hold, or have held, positions of power in the state. Their wealth and dealings should be available in great detail to public view. As for the rest of us, our money is ours and we are entitled to privacy.

Craig Murray is an author, broadcaster and human rights activist. He was British Ambassador to Uzbekistan from August 2002 to October 2004 and Rector of the University of Dundee from 2007 to 2010. At the 2005 UK General Election, Craig Murray takes on Foreign Secretary Jack Straw in Blackburn as an Independent candidate, winning 2,082 votes.