Largesse: US Air Force Seeks the Aircraft Equivalent of a Swiss Army Knife 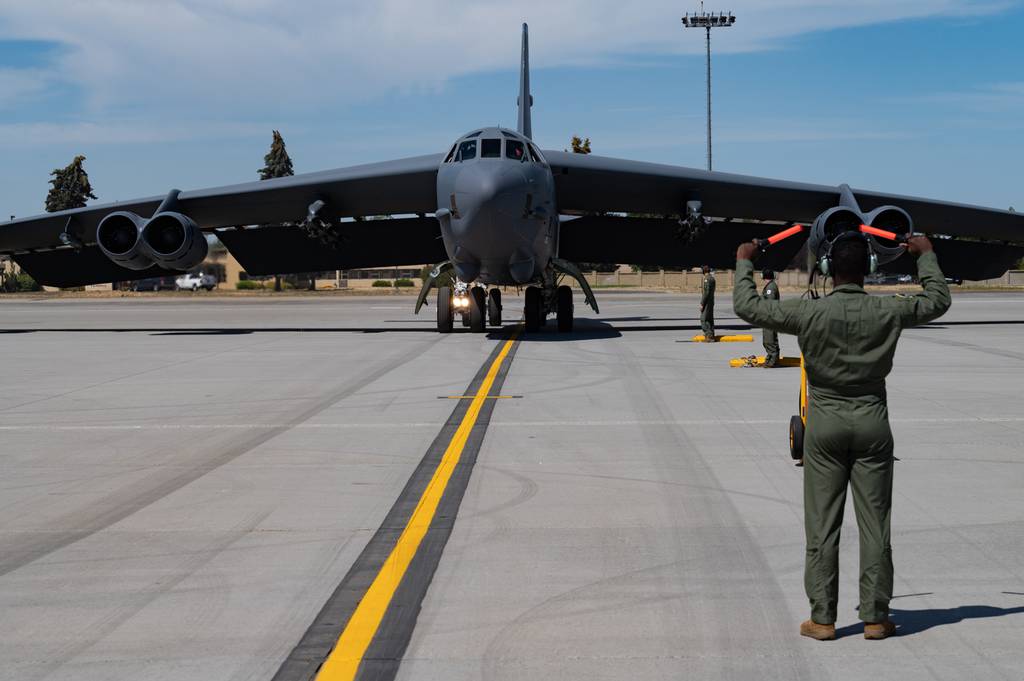 7 Nov 2022 – The C-17 Globemaster is one of the workhorses of the U.S. Air Force’s mobility fleet, transporting everything from heavy weaponry, like tanks, to hundreds of passengers.

But the Air Force has another mission in mind for the massive aircraft: carrying pallets of standoff cruise missiles.

As the service prepares for a potential high-end fight against a major adversary, such as China, and weighs the reality of limited budgets and fleets, the service is looking to wring more capabilities out of existing aircraft — some of which are decades old.

In a war against China, U.S. Air Force leaders have repeatedly said airspaces will likely be highly contested, units could be cut off and isolated, and losses are probable. Under those circumstances, having several types of planes each performing a unique task is a luxury the Air Force can’t afford.

The service knows it can’t count on Congress to fund scores of tailor-made airplanes for unique missions, and so it is turning to planes already sitting on the flight lines as a way to stretch its capabilities.

Think of this effort as turning key parts of the fleet into the aircraft equivalent of a Swiss Army knife — making airplanes flexible enough to carry out multiple roles beyond the missions for which they were designed.

“What we’re seeing is the Air Force taking legacy platforms and trying to create additional utility for them in nontraditional ways,” Heather Penney, a former F-16 pilot and now a senior resident fellow at the Mitchell Institute for Aerospace Studies, told Defense News. “So having this additional flexibility built in can create capacity … and some capability [where needed].”

Industry is taking note. As contractors pitch new planes to the Air Force, those manufacturers are touting the additional capabilities their aircraft could offer beyond their primary mission.

The idea is not far off from the Air Force’s strategy of creating “multi-capable airmen,” Air Force Chief of Staff Gen. CQ Brown told reporters at a roundtable in September at an Air and Space Forces Association conference.

Under the multi-capable airmen concept, the service is seeking personnel who can do other jobs besides their own — for example, teaching a maintainer the basics of loading weapons or refueling planes. That way, if a war erupts, airmen deployed to isolated bases without reinforcements would be able to do several jobs and keep their units functioning.

But having multi-capable aircraft, so to speak, also creates opportunities to complicate how the enemy manages its battlespace, Brown said.

For instance: If an enemy force spies a C-130 on its radar, is that plane carrying nonlethal food or equipment? Or is that C-130 ferrying something more dangerous — perhaps a pallet of cruise missiles, seconds away from deploying out the back and delivering a barrage of firepower?

The scenarios might prompt very different responses from an enemy — but it would be hard to tell what’s inside the cargo bay.

“This combo provides us more opportunity,” Brown said. “It also complicates and creates dilemmas for our adversaries. They’ve got to account for these things.”

Penney said using aircraft in nontraditional ways could shake up how an enemy understands U.S. strategies and techniques.

“China has gone to school on how the United States goes to war,” Penney said. “Guess what? It hasn’t changed a whole lot. … So it’s been very easy for China to go: ‘Oh, this is exactly the play that they’re running.’ ”

Bomb bay in a box

The Vietnam War saw America drop BLU-82/B “Daisy Cutter” bombs from C-130 cargo planes to create helicopter landing zones. The GBU-43/B Massive Ordnance Air Blast bomb has also been deployed from MC-130J Commando IIs, such as during the 2017 operation where one was dropped on a tunnel complex of an Islamic State group affiliate in Nangarhar, Afghanistan.

The concept, dubbed Rapid Dragon, is essentially a bomb bay in a box — a pallet of Joint Air-to-Surface Standoff Missile Extended Range cruise missiles, or JASSM-ER, that airmen can load onto an MC-130J or C-17 Globemaster without modifications to the plane.

Once in range, the crew deploys the weapons in the same way it would drop equipment — by sliding the pallet out of the back using standard airdrop procedures. One by one, the quartet of missiles would release, spring their wings and tail, ignite their engines and streak toward their targets.

In 2020, the lab awarded a contract, which was worth up to $25 million, to Lockheed Martin to develop this system. Late last year, the lab conducted the final flight test, successfully destroying a target over the Gulf of Mexico using a cruise missile launched from an MC-130J.

The lab said it plans to continue adding different “kinetic and non-kinetic” munitions to Rapid Dragon, among other capabilities in 2023 and beyond.

If Rapid Dragon proved a C-130 can essentially act as bomber, a bomber can also serve as a cargo plane.

Barksdale Air Force Base in Louisiana announced in August it had rigged up B-52H Stratofortress bombers to carry as much as 10,000 pounds of cargo.

During an exercise at Fairchild Air Force Base in Washington, the bombers tested using the B-52 On-Board Cargo System, which are cargo containers that can plug into bomb bays. Each container — a B-52 can carry two — can hold up to 5,000 pounds of maintenance and support equipment, the Air Force said.

This could allow a deploying B-52 to carry the tools, spare parts and other supplies for maintenance and operations once on site, the service added.

The service also said this could be particularly useful as part of its agile combat employment, or ACE, concept, practiced during the Fairchild exercise. Air Force Global Strike Command said in an email to Defense News that it plans to next test this concept at an overseas location “in the near future.”

The ACE strategy calls for spreading out the service’s airmen and aircraft across a network of dispersed bases throughout a region, rather than concentrating its force across a few centralized bases vulnerable to enemy strikes. The Air Force has worked to hone this concept in recent years.

These dispersed bases could include partner nations’ military airfields, civilian airports or austere bases set up in the field. But key features of ACE are resiliency and the ability to operate with a great deal of self-sufficiency.

For years, the service has counted on the E-3 Sentry — also known as the AWACS, or Airborne Warning and Control System — to provide command, control, intelligence, surveillance and reconnaissance capabilities.

But the AWACS is approaching retirement, as are some of the service’s other aircraft that offer similar capabilities.

The Air Force has tapped the E-7 Wedgetail as a replacement, but the first one won’t arrive until 2027, and it will be several more years after that until the Air Force has a viable fleet. In the meantime, warfighters will need another way to get accurate pictures of the battlefield.

As part of its Advanced Battle Management System program, the Air Force has equipped some KC-46s with tools that allow it to pass information between fifth-generation fighters, therefore serving as data-sharing nodes on the battlefield.

That effort is starting to pay off, the service said in September. Over the summer, KC-46s deployed to Qatar used an onboard system to serve as nodes, securely connecting a ground-based air operations center with nearby aircraft. This was the first time the system was successfully used in a combat operation, Air Mobility Command said.

The command’s chief, Gen. Mike Minihan, told reporters at the AFA conference in September that the KC-46′s ability to connect personnel and provide more situational awareness is another factor that makes it a useful aircraft, beyond its primary mission of refueling planes.

In response, the defense aviation sector is acknowledging it can’t just pitch planes that are essentially one-trick ponies. In a Sept. 20 interview, Greg Ulmer, executive vice president of aeronautics at Lockheed Martin, said the company wants to include equipment to support the Pentagon’s joint all-domain command and control concept on its proposed LMXT refueling tanker. JADC2 is a multibillion-dollar effort meant to tie together all components of the U.S. military, from sensor to shooter.

Lockheed hopes the Air Force will choose LMXT for its KC-Y program.

Ulmer said technology now exists to make airplanes such as the LMXT tanker into “multi-utility players,” capable of collecting information through sensors and then serving as a node to distribute that information.

“They’ll be able to create a very robust digital picture of the environment,” Ulmer said. “We’ll be able to fuse that information collected across multiple domains into a sight picture from a battle management perspective. So you could have a [C-130] flying a cargo mission, or a tanker collecting a lot of information and then processing that and forwarding it, or relaying it in a situation.”

“If you want to win, the current threat environment is going to drive certain types of solutions,” he said. “If you’re not doing that, you’re going to lose.”

But there are still challenges in setting up this kind of a network, Ulmer said — most notably, having a common communication standard that would allow multiple types of aircraft to talk to one another. He noted that Air Force Secretary Frank Kendall’s decision, announced in September, to appoint a program executive officer to oversee efforts to modernize command, control, communications and battle management should help produce that common standard.

Penney said the Swiss Army knife approach helps wring more out of legacy platforms, but that the effort comes at a cost and fails to address recapitalization needs.

Speaking to reporters at the AFA conference, Brown couldn’t speak to the Air Force’s next unorthodox use of an aircraft, although he and Kendall are looking for more ideas.

Brown said these kind of unusual ways to use aircraft could help achieve some of Kendall’s operational imperatives for improving how the Air Force fights its wars — bolstering battlefield management and resilient basing.

Given the U.S. is not engaged in large-scale combat, Brown said, now is the right time to test these concepts and ensure they work.

Chief Master Sergeant of the Air Force JoAnne Bass said these out-of-the-box ideas will most often come from the airmen who perform related jobs every day. It’s up to them to brainstorm and share their ideas, she added, rather than expecting higher-ups to think of them.

“If our airmen are waiting for the answer to come from the Pentagon, they’re going to be waiting for a long time,” Bass said.

Stephen Losey is the air warfare reporter for Defense News. He previously covered leadership and personnel issues at Air Force Times, and the Pentagon, special operations and air warfare at Military.com. He has traveled to the Middle East to cover U.S. Air Force operations.