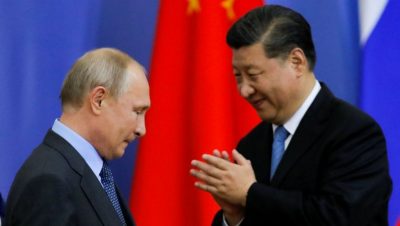 1 Nov 2022 – Speaking on Oct. 27 at the Valdai International Discussion Club, Russian President Vladimir Putin questioned the sanity of those who would “spoil relations with China at the same time they are supplying billions-worth of weapons to Ukraine in a fight against Russia.”

In answer to a question on “the growing tensions between China and the United States over Taiwan,” Putin labeled visits by top U.S. officials to Taiwan a “provocation.” Putin added:

“Frankly, I do not know why they are doing this. … Are they sane? It seems that this runs completely counter to common sense and logic … This is simply crazy.

“It may seem that there is a subtle, profound plot behind this. But I think there is nothing there, no subtle thought. It is just nonsense and arrogance, nothing else. … Such irrational actions are rooted in arrogance and a sense of impunity.”

What kind of people are behind what Putin describes? It turns out they come from the same stock of white-privileged, exceptional, ivy-mantled “Best and Brightest” that brought us Vietnam. This time, it is President Joe Biden who brought them in. Giving Biden the benefit of the doubt, I believe he was/is not smart enough to understand that they have made a big mess of things.

These are the sophomores, totally ignorant of how the Russia-China relationship had evolved, who told Biden at the Geneva summit on June 16, 2021 that “Russia is in a very, very difficult spot right now … being squeezed by China. …,” which Biden parroted planeside before departing Geneva.

In his Valdai speech Putin quoted from a Harvard Commencement address by Alexander Solzhenitsyn:

“A continuous blindness of superiority is typical of the West; it upholds the belief that vast regions everywhere on our planet should develop and mature to the level of present-day Western Systems.”

“Solzhenitsyn said this in 1978. Nothing has changed. … Belief in one’s infallibility is very dangerous; it is only one step away from the desire of the infallible to destroy those they do not like. … “They arrogantly rejected all other variants and forms of government by the people and, I want to emphasize this, did so contemptuously and disdainfully … as if everyone else were second-rate, while they were exceptional.”

“We highly appreciate the positive remarks by President Putin on China-Russia relations; they have maintained the momentum of robust development.”

The foreign ministry spokesman added that Chinese Foreign Minister Wang Yi had a phone call with Russian Foreign Minister Sergei Lavrov on the day Putin spoke at Valdai, and that the two diplomats “exchanged views on the Ukraine crisis.”

Putin lampooned the Antony Blinken/Jake Sullivan concoction of the “rules-based order.” As for the idea of “substituting ‘rules’ for international law.” Putin quipped, as he began his prepared remarks at Valdai:

“I was tempted to say ‘We are clear about who made up these rules’, but perhaps that would not be an accurate statement. We have no idea whatsoever who made these rules up, what these rules are based on, or what is contained inside these rules.

“It looks like we are witnessing an attempt to enforce just one rule where those in power … could live without following any rules at all and could get away with anything.”

Later, during the Q and A, Putin rang some changes on the “rules-based” concept:

“They are talking about rules – what rules? Where are they written and who has approved them? It is nonsense … nothing more than rubbish. Still, they keep drumming it into people’s heads indefinitely. And those who do not observe these rules will be subject to restrictions and sanctions.

Putin appeared vigorous and fully alert, with a prodigious grasp of detail, during his three and a half hours on stage at Valdai. He even told a couple of jokes … one about Russia being blamed for everything – including broken toilets. In this connection, readers might enjoy this short video showing who was to blame for sabotaging the Nord Stream pipelines. (Perhaps one reason Putin seemed in such high spirits is that he had already seen this video.)

Nonetheless, in his earlier, prepared remarks, Putin was dead serious in addressing what he called, multiple times, the “tectonic shift” in the world correlation of forces.

“Now this historical period of boundless Western domination in world affairs is coming to an end. The unipolar world is being relegated to the past. We are at a historical crossroads. We are in for probably the most dangerous, unpredictable and at the same time most important decade since the end of World War II. The West is unable to rule humanity single-handedly and the majority of nations no longer want to put up with this. This is the main contradiction of the new era. To cite a classic, this is a revolutionary situation to some extent – the elites cannot and the people do not want to live like that any longer.”