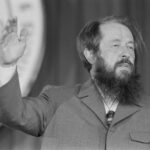 Ideology – that is what gives the evildoing its long-sought justification and gives the evildoer the necessary steadfastness and determination.
Aleksandr Solzhenitsyn – TRANSCEND Media Service, 28 Dec 2020