* Over 100 Minnesota law enforcement officers attended a 2012 conference organized by the Israeli consulate in which Israeli police trained them. Israeli forces often use the knee-on-neck restraint on Palestinians.
* Israel has been training law enforcement officers around the US for many years, despite the fact that Israeli forces have a long record of human rights violations. 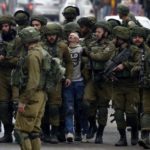 Associated Press is one of those news sources we expect to be objective and reliable. But when it comes to the subject of Israel-Palestine, things are not always as they seem.

One of the top journalists to report on Palestine-Israel has died May 10. Many activists in the growing Palestine solidarity movement are unaware that he exposed critical facts about Palestine with unparalleled precision and elegance. Much of the information he uncovered is still significant today.

The Washington Post has published a moving article, “Russian Jews remember Israeli athletes murdered at 1972 Munich Olympic Games.” Unfortunately, it gets a few things wrong and provides a one-sided context for the tragedy. Allow me to correct the report and fill in a few of the missing facts.

President of International War Crimes Tribunal May Have Worked to Shield Israelis from Prosecution
Alison Weir – The Council for the National Interest, 24 Jun 2013

The NY Times says that the Israeli-American judge, Theodor Meron, “… has led a push for raising the bar for conviction in such cases, prosecutors say, to the point where a conviction has become nearly impossible.” Some analysts feel that Meron’s motivation may be to protect Israeli political and military leaders from prosecutions that could place them in legal jeopardy.

We’re Tired of Pretend Democracy – Not often is a political fix so public. The Democratic committee that develops the party’s campaign platform recently failed to include the apparently obligatory “Jerusalem is and will remain the capital of Israel” pronouncement. In fact, I believe an uprising in the United States may be coming. People are tired of wars and killing, and of being sold a pack of goods by both parties using lies, deception, and manipulation.

The Outrage at Helen Thomas. Whenever Israel commits yet another atrocity, its defenders are quick to redirect public attention away from the grisly crime scene.