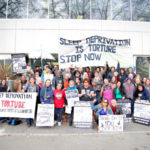 10 Jan 2018 – In prison isolation units throughout California, guards wake prisoners up every 30 minutes under the guise of suicide prevention. These “security/welfare checks” cause ongoing sleep deprivation. The UN and many sleep and mental health experts have long defined sleep deprivation as a form of torture.

Haiti moves into 2017 with a “president” who would never have won an honest election. A tiny number of ruling families backed by the United States, Canada, and France, operating through a United Nations military occupation, has imposed an imperial ruler on an unwilling population through a process they call an “election.” Everyone in Haiti knows this, but outside we don’t.

Since the days of the Monroe Doctrine, the U.S. has considered all of Latin America its exclusive “back yard.” It’s maintained a regionally consistent imperial policy to guarantee subservient governments and business arrangements that submit fully to the discipline of global financial markets at the expense of democracy and human rights.