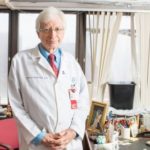 Michael Holick, a renowned scientist turned expert witness, relies on his own controversial theory to help alleged abusers avoid prison and regain custody of the babies they were accused of harming.