Why Is the Foreign Policy Establishment Spoiling for More War? Look at Their Donors
Dennis Kucinich – The Nation, 7 Nov 2016

War is first and foremost a profitable racket. We must not accept war as inevitable, and those leaders who would lead us in that direction, whether in Congress or the White House, must face visible opposition.

20 Oct 2016 – The most consequential statement by Secretary Clinton in last night’s debate was her pronouncement that a no-fly zone over Syria could “save lives and hasten the end of the conflict,” that a no-fly zone would provide “safe zones on the ground” was in “the best interests of the people on the ground in Syria” and would “help us with our fight against ISIS.” It would do none of the above.

Three Members of Congress Just Reignited the Cold War While No One Was Looking
Dennis Kucinich - Truthdig, 22 Dec 2014

The Congressional Record will show ONLY THREE of 425 members were present on the floor to consider the sanctions bill. According to the clerk’s records, once the bill was considered under unanimous consent, it was passed in one second, unanimously.

We must resist the illusion that the only “decisive” response to terrorism is bombing. Instead, we should begin to confront ISIS by drying up its sources of revenue from places like Saudi Arabia and Qatar.

Crimes against Humanity in Gaza: Is It Really a ‘Buffer Zone’ – Or a Bigger Plan?
Dennis Kucinich – The Guardian, 11 Aug 2014

5 Aug 2014 – It’s time to step back and ask if we want to support Israel if it wants to eject all Palestinians from their land. Late last week, the White House decried Israel’s attack on a UN school in Gaza as “totally unacceptable” and “totally indefensible”, then proceeded to approve $225m in funding for its Iron Dome.

Israel can kill, injure, humiliate Palestinians at will, with impunity, which is exactly what gave rise to Hamas and strengthens Hamas’ hold in Gaza, even as the IDF advances… Since the U.S. is helping to pay Israel’s bills, we cannot avoid the consequences of paying the price for Israel’s actions against the Palestinians.

While the draft of the EU “Association Agreement” is being sold as an economic boon for Ukrainian citizens, it is a massive expansion of NATO’s military position in the region. Naomi Klein’s Disaster Militarism. Ukrainians may be pro-EU, but are the EU and NATO pro-Ukrainian?

Here are some key questions which President Obama has yet to answer in the call for congressional approval for war against Syria. This article is a call for independent thinking and congressional oversight, which rises above partisan considerations.

Ten years ago today [2 Oct 2012] the debate over the Iraq War came to Congress in the form of a resolution promoted by the Bush Administration. The war in Iraq will cost the United States as much as $5 trillion. It played a role in spurring the global financial crisis. Four thousand, four hundred, eighty eight Americans were killed. More than 33,000 were injured. As many as 1,000,000 innocent Iraqi civilians were killed. The monetary cost of the war to Iraq is incalculable. A sectarian civil war has ravaged Iraq for nearly a decade. Iraq has become home to Al Qaeda. 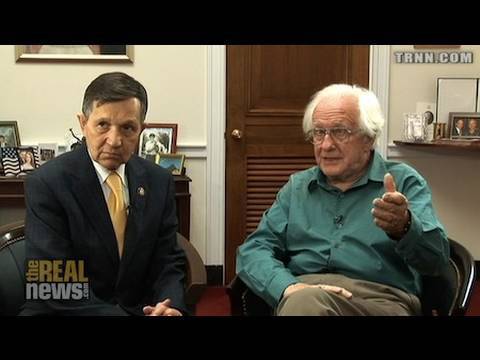 The Fall of the US Empire – And Then What? (Part 1)
Paul Jay interviewing Johan Galtung and Dennis Kucinich -The Real News Network, 2 Aug 2010

Johan Galtung and Dennis Kucinich discuss the proposal for a Department of Peace.

The Fall of the US Empire – And Then What? (Part 2)
Paul Jay interviewing Johan Galtung and Dennis Kucinich - The Real News Network, 2 Aug 2010

Dennis Kucinich and Johan Galtung discuss the proposal for a Department of Peace.

Is the U.S. Paying for Attacks on U.S. Troops?
Congressman Dennis Kucinich, 21 Jun 2010

After the New York Times reported that investigators in Afghanistan and Washington D.C. believe that private Afghan security companies, with close connections to the Karzai government and family, may have bribed insurgents to attack American and NATO convoy lines in order to demonstrate their companies’ value to the security of U.S. and NATO forces, Congressman Dennis Kucinich (D-OH) released the following statement: