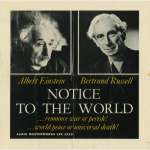 13 Jul 2020 – Sixty-five years ago this week, Albert Einstein, Bertrand Russell and nine other Nobel Laureates released a historical document which became known as the Russell-Einstein Manifesto. The Manifesto called for the governments of the world to abolish nuclear weapons in order to eliminate the imminent danger of nuclear warfare and an existential threat to the human race.