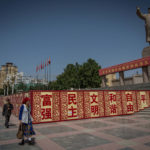 23 Nov 2018 – While cloaked in the war on terrorism, many of the state’s actions are aimed at Islam itself. This has culminated in the reintroduction of a Mao-era measure: re-education camps. Then, the idea was to punish people who had the wrong class background; now, it is Muslims who have not assimilated enough. At first, reports of this seemed like an impossibility in the twenty-first century. Recently, though, the state has admitted they exist, saying they are needed to control extremism.