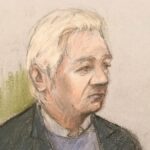 Assange “Struggles to Say His Own Name” as He Appears in Court
Jack Peat | The London Economic – TRANSCEND Media Service, 28 Oct 2019

21 Oct 2019 – WikiLeaks founder Julian Assange appeared to struggle to say his own name as he appeared in the dock at Westminster Magistrates’ Court today to fight extradition to the US. Assange told the judge he is up against a “superpower” with “unlimited resources” and appeared to be fighting back tears as he added: “I can’t think properly.”