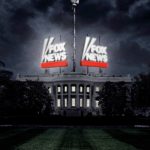 Fox—which, as the most watched cable news network, generates about $2.7 billion a year for its parent company, 21st Century Fox—acts as a force multiplier for Trump, solidifying his hold over the Republican Party and intensifying his support. “Fox is not just taking the temperature of the base—it’s raising the temperature,” she says. “It’s a radicalization model.” For both Trump and Fox, “fear is a business strategy—it keeps people watching.” As the President has been beset by scandals, congressional hearings, and even talk of impeachment, Fox has been both his shield and his sword.

James Hansen, the head of NASA’s Goddard Institute for Space Studies, and one of the country’s foremost climate scientists says if the Keystone XL oil pipeline were built, “Essentially, it’s game over for the planet.” But at Middlebury College, in Vermont, Bill McKibben, a scholar-in-residence, concluded that the pipeline couldn’t be stopped by conventional political means. “It’s time to stop letting corporate power make the most important decisions our planet faces. We don’t have the money to compete … but we do have our bodies.” Power concedes nothing without a demand. It never did and it never will.