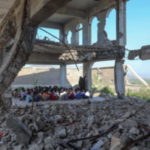 A less publicized Trump policy that actually killed children was the fulfillment of his campaign promises to “bomb the shit out of” America’s enemies and “take out their families.” After devastating U.S. bombardments that killed tens of thousands of civilians and left major cities in ruins, US’ Iraqi allies fulfilled the most shocking of Trump’s threats and massacred the survivors – men, women and children – in Mosul.