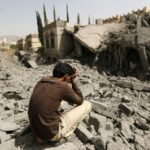 Why Bombs Made in America Have Been Killing Civilians in Yemen
Michael LaForgia and Walt Bogdanich | The New York Times - TRANSCEND Media Service, 18 May 2020

16 May 2020 – President Trump sees arms deals as jobs generators for firms like Raytheon, which has made billions in sales to the Saudi coalition. The Obama administration initially backed the Saudis too, but later regretted it as thousands died.