Articles by Peter Wade, Audrey Smedley and Yasuko I. Takezawa 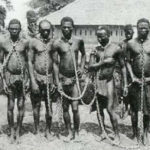 29 Jan 2020 – Race, the idea that the human species is divided into distinct groups on the basis of inherited physical and behavioral differences. Genetic studies in the late 20th century refuted the existence of biogenetically distinct races, and scholars now argue that “races” are cultural interventions reflecting specific attitudes and beliefs that were imposed on different populations in the wake of western European conquests beginning in the 15th century.