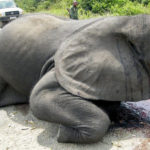 The EU sees itself as a conservation leader, yet it has a blind spot for the ivory business. The trade in “antique” ivory remains legal in the EU – a convenient loophole to launder tons of freshly poached tusks and export them to Asia. Tell the EU to kill the trade – before the trade kills the last elephants!

Monsanto is trying to offer the Haitian Ministry of Agriculture a fatal gift. The Haitian peasants will receive 475 tons of its seeds. This worsens the farmers’ situation. The organisations of La Via Campesina have expressed their strong disagreement and have demonstrated during the World Environment Day (Juny 4th) to say “no to Monsanto’s mortal gift which is a new earthquake hitting the agricultural sector”. They are asking your support to protect their food sovereignty. Help them today by signing a personal letter to the Haitian authorities.