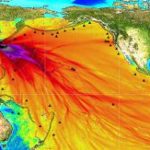 14 Aug 2019 – The Worst Nuclear Accident in History – The three meltdowns and at least four big core explosions at the Fukushima nuclear-power plant’s six Daiichi reactors in March 2011 still constitute the world’s worst nuclear nightmare so far, surpassing even the Chernobyl explosion and meltdown of April 1986. While Chernobyl’s disaster was very quickly contained by first having the stricken reactor completely buried in sand from the air and immediately sealing it inside a sarcophagus of reinforced concrete, Fukushima’s tragedy has remained an open, festering wound to this day.