Is it fair for the US to expect unconditional obedience from Russia against its own national interests? 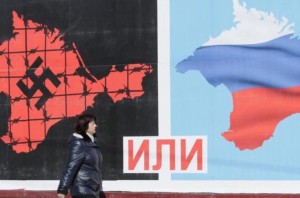 The US domino theory holds that if the US lets go of just one country from their orbit of influence, then the whole world would instantly fall apart, writes Khrushchev [EPA]

Crimea is by far not the first entity – and won’t be the last – to achieve independence in this way. In the past, the US broke off the British Empire, while Kosovo just recently left the borders of Serbia. It is in this manner that many achieved their independence, whether Abkhazia, Algeria, Nagorno-Karabakh, East Timor, South Ossetia, Czechoslovakia (which split into the Czech Republic and Slovakia), and maybe soon Scotland (due to hold its own independence referendum).

In 1991, in spite of the Soviet constitution, Ukraine itself acquired its independence. The list goes on and it is a natural process within the dynamic development of the world, when some announce independence and others lose their colonial territories and subordinate lands. It is a painful process, but we’ve gotten used to it. As the international scandal around Crimea erupted, it sucked into its orbit countries which until 2014 knew almost nothing about the peninsula.

And this was all because the US decided it was so, taking up homegrown illusory theories without considering international realities. For example, at some point in the US, the domino theory was popular, according to which, if they let go of just one country from their orbit of influence, then the whole world would instantly fall apart. This theory turned out to be not even a theory, but a fantasy, and yet, because of it, the US and the world lost countless lives.

Now in the US, there’s another fantasy: If they let any of the former Soviet states get closer to Russia, then the Soviet Union will be reconstituted, marking a return to Cold War. The fact that such a scenario is impossible, after 25 years of independence for these countries, is not taken into account. For Americans, fantasy seems stronger than reality.

And of course, one can see the US attempts to demonstrate that today’s world is the American world: Washington decides on everything – who to judge worthy or unworthy. This is how it was once in Pax Romana. Until, of course, Rome fell.

And thus the US is dictating its will, which tends to be a product of domestic interests and reflects internal struggles between its political forces. It imposes its will  on the rest of the world and does not back down from its stance, not an inch, even if this position is completely flawed.

One more component: President Barack Obama is somehow believed to be a weak president, which gives the impression that anything that happens in the world involves the US. I don’t know whether or not Obama is a weak politician. Personally, I find him likeable, but a politician’s strength or weakness is a very serious factor in world politics.

A strong politician and leader need prove, neither to himself nor to his circle, that which is obvious to everyone. He feels free and participates in negotiations with his opponents, trying to explain his position and understand his partners; he is always ready to make a reasonable compromise and in the end makes decisions even in impossible situations. An example of that is how President John F Kennedy and the head of the council of ministers, Nikita Khrushchev, both strong politicians, behaved during the Cuban crisis and found a solution under mutually acceptable conditions.

A weak politician always tries to prove to his circle and to himself that he is not what others think of him; he has to prove his strength which, in reality, turns out to be obstinacy rather than strength. After making a statement, he would not change his position at all, or else he would appear weak, and at the same time avoid negotiations in person because he fears them.

Instead, he sends emissaries with rigid, uncompromising instructions, draws red lines, resorts to threats and sanctions, and demands capitulations from his partner, i.e. useless and counter-productive negotiations. No self-respecting country would agree to capitulation.

As a result, the weak politician tends to quickly draw the situation into a conflict rather than a solution. And all this is to prove his power – to himself and others – and because of that he is ready to sacrifice countless lives.

He is ready to impose sanctions, which will lead to the suffering of millions of people, which will hurt not only the partner-opponent, but also his own country. That is why, the sanctions will not only hit the enemy, but also deprive the US from millions of potential customers. And all this to prove one thing – that he is not weak.

I repeat, I don’t know whether Obama is weak as a politician, but it is precisely this sort of “uncompromising” situation that is being set up around Crimea. The US president made effort to put together a coalition which does not recognise the will of the people. And all this against the principle which was declared by his own predecessors.

Let’s remember Woodrow Wilson, who declared the right of every nation to self-determination and statehood. Or President Clinton, who was not reluctant to use military force to try and convince Slobodan Milosevic of the right of Kosovo’s Albanians to establish a state.

Now everything is happening in the opposite direction. Crimeans are threatened by sanctions and by the direct enforcement of Kiev’s power onto them. And for expressing support for Crimea, Russia is also threatened with sanctions. Will such policies work? I doubt it. It would rather have the opposite effect: It will stimulate the struggle for independence inside Crimea and it will encourage Russia to assume an even firmer position of support for this movement. Let’s remember how in the 19th century, Russia held firmly its support for the liberation movement of the Bulgarians from Turkish rule.

As for the sanctions, they of course are painful, but the use of such pressure is insulting to the national self-consciousness and will only provoke the Russians to undertake even more intransigent resistance. This has happened more than once in history.

During the 1853-1855 war, Sevastopol survived a long siege by the combined forces of the English, French and Turks, while in 1941-1942 it resisted the German army for almost a year. Should I also mention the 900-day siege of Leningrad? Then, too, those leading the siege were driven by the logic that capitulation is inevitable, but the besieged decided the opposite and in the end, they won. And now these sanctions…

Financial rewards for all?

But in all this unpleasant story, there is also a positive aspect: The stormy clouds of Crimea poured a golden shower over Ukraine. It received from the West more financial help than it ever dreamed of. It’s another question whether the new government will be able to use it reasonably. Or will they put it into their own pockets?

The White House did not waste time and it officially recognised the self-formed revolutionary government of the Maidan and Obama even welcomed its prime minister and showered him with kindness.

Crimea got lucky, too. Due to lack of investment in the past 20 years, its infrastructure has become dilapidated. Now it’s Russia’s honour to rebuild Crimea.

The Tatars got lucky, too. The Russian Parliament promised them maximum political, cultural and other privileges, which they requested from Kiev before, but to no avail. Of course, Tatar autonomy in Crimea is impossible; they are only 12 percent, but an adequate presence in all governmental institutions is guaranteed for them, as well as legalisation of the lands, which they took over illegally and continue to live on without any rights or guarantees.

And as for the accusations and insults thrown at President Vladimir Putin, let’s think about them. Twenty-five years ago, his predecessor Mikhail Gorbachev turned his face westward, declared his adherence to Western values and friendship with the US. Boris Yeltsin followed the same policies, and even Putin in his early years did so.

The US did not abide by any of its promises to Russia, neither the written ones, nor the spoken ones. They promised that NATO would not enter Eastern Europe, and what is the reality today? Russia supported the US war on Iraq and even the intervention in Libya aiming at regime change. As a result, Russian companies have been squeezed out of the markets of these countries.

From Russia, they expect unconditional obedience, without any attempt to defend Russian national interests. And on top of that, it’s threatened by sanctions. It seems that they perceived the friendship between Russia and the US to mean that Russia would remain a small nation in the American orbit . Maybe Putin simply got tired of doing that?

This is the second part of Sergei Khrushchev’s essay on Crimea. The first part IS HERE.

Sergei Khrushchev is a Senior Fellow at the Watson Institute for International Studies at Brown University. He is son of the late USSR Premier Nikita Khrushchev.

One Response to “Crimea: Whose Land Is This? (Part 2)”