Five Myths about the Crimean Referendum

16 Mar 2014 – As voting gets underway – and by all accounts, it seems to be overwhelmingly heading for the pro-secession choice – it’s worthwhile to dispel five common but erroneous beliefs about it.

(1) The referendum is unconstitutional.

This is true enough, as all of Ukraine would have to vote on it. But there is one big catch: The Ukrainian Constitution has been null and void since around February 22, 2014, when the Kiev mob overthrew a democratically elected President and the opposition seized power.  If the new regime absolutely insists on constitutional niceties, then it should dissolve itself and bring back Yanukovych from Rostov. This is hardly going to be happening anytime soon, so the only conclusion to be drawn is that, as in much else, the new regime and its Western backers only discover legality when it suits them. And that’s just fine, it’s “people power” and that’s supposed to be great and all, especially when it’s happening outside the West… but unless one wants to proudly and openly embrace double standards, then the mobs in Crimea have just as much of a right to decide their own destiny as do the mobs in Kiev.

(2) The referendum can’t be fair because of the presence of armed Russian troops.

Of course, nobody is buying the official Kremlin line that there are no Russian troops – or at least mercenaries – operating in Crimea. That said, if we insist on going by this standard, then we’ll have to concede that all Afghan elections since 2001 and all Iraqi elections since 2003 will have to be likewise invalidated. For some reason, I don’t see Washington conceding this anytime soon. 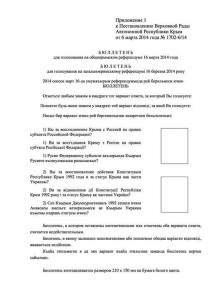 Here is the form, which is printed in the Russian, Ukrainian, and Tatar languages. The two options are:

Do you support restoration of 1992 Crimean Constitution and Crimea’s status as a part of Ukraine?

It is also clearly stated that marking both answers will count as a spoiled ballot.

(4) Most Crimeans do not support independence.

Two pieces of evidence are typically wheeled out in support for this: The fact that the Crimean PM Aksynov’s Russian Unity Party only achieved 4% in the 2010 elections in Crimea, and a February 8-18 poll showing that only 41% of Crimeans supported union with Russia.

The rejoinder to the former is easy – tactical voting. An outfit such as the Russian Unity Party would have no chance at the all-Ukraine level, so pro-Russian Crimeans understandable voted for the Party of Regions. And overwhelmingly so.

The poll is harder to argue with, but far from impossible.

First, 41% is a very substantial share of the population, and clearly enough to justify a referendum. Most polls show lower support for Scottish independence, and yet they are going through with it. The referendum that split Montenegro from Serbia succeeded by the lowest of margins.

Second, the political situation has changed cardinally since mid-February. The President that Crimeans overwhelmingly voted for has since been overthrown in an unconstitutional coup, and power has been parceled out between Batkivschina and the fascist Svoboda party. Instead of maintaining the status quo until the elections – a not unreasonable expectation of an unelected transition government – they have instead pushed to roll back the Russian language, “lustrate” Party of Regions officials, appoint oligarchs to rule the restive eastern provinces, and formalize the status of Right Sector – the armed wing of Svoboda – as a paramilitary force. At the same time, Russian intervention has transformed the prospect of joining Russia from a pipedream held by Soviet nostalgics to a real choice on a paper ballot. In these circumstances, it is almost certain that support for Crimean secession has gone up.

Up, and radically so. Since then, two more recent polls have shown support for joining Russia at 77% and more than 80%. This is largely confirmed by anecdotal evidence (with all the necessary caveats about it being a lower standard of evidence than polls). Residential buildings and cars are festooned with Russian flags. There is nary a voice of objection to be heard at the (politically neutral) Sevastopol city forum. Turnout at the pro-Russian rallies in Crimea was several times higher than at the pro-Ukrainian one. Source? That infamous Kremlin stooge, The Economist’s Russia correspondant:

New update 3/16 – futhermore, as several commentators have pointed out, the precise wording of the poll that showed 41% support for union with Russia asked the question for Ukraine as a whole, as opposed to just the respondents’ region. In which case the cause of the discrepancy between it and the two recent polls becomes eminently clear: While Crimeans would very much like to join Russia themselves, they also realize that Lviv, say, wouldn’t be too happy or productive with such an the arrangement.

Crimea is the only region of Ukraine where ethnic Russians, at 58% according to the last Census in 2001, constitute an absolute majority. Conquered by Russian arms, it was handed over to the Ukrainian Soviet Socialist Republic in 1954, at a time when inter-Soviet borders were little more than a formality, to mark the 300-year anniversary of the Treaty of Pereyaslav that bound Ukraine’s destiny with Russia’s. Now that Kiev has been taken over by a clique who utterly and entirely reject this shared legacy, and see their future as an outpost of the Euro-Atlantic Empire, it is hardly fair to expect Crimeans to suppress their own cultural and political traditions in pursuit of a revolutionary project spearheaded by Kiev and Lviv that they themselves have no interest in and no attachment to.

(5) The Crimean Tatars will be persecuted or marginalized.

The problem with the above argument, a Euromaidanite might rejoinder, is that Crimea really belongs to the Tatars.

With Sochi over and the Circassians once again relegated to the margins now that they are no longer useful for kicking Russia, many crocodile tears are now being shed in editorials and blog comments about the Tsarist persecution and Stalinist deportations of the Crimean Tatars. Their blood, their land, so to speak. But then, why not the Scythians? Or the Greeks? Or for that matter, why no consideration for the three million Slavs – Russians, Ukrainians, and Poles – that were sold into slavery by the Crimean Khanate during its three centuries of existence? Funnily enough, the people who are concern trolling all the way back into 18th century history conveniently stop at that precise point when Catherine the Great conquers the Crimean Khanate.

Short of Turkey invading and ethnically cleansing the Slavs, or making the Tatars into a ruling caste, Crimea will never “belong” to the Tatars under any vaguely liberal and democratic political order.

Back in the real world of 2014, the Crimean Tatars are going to guarantees of proportional representation in the legislative and executive bodies, and official status for the Tatar language (this is more, incidentally, than they could bargain on in a Ukraine co-run by Svoboda and Right Sector). Bearing in mind all this, it should come as no surprise that Crimean Tatars are nowhere near as monolithic on the secession question as the Western media has made them out to be. For a start, Crimea’s Deputy PM, Rustam Temirgaliev, is an ethnic Tatar. Many ethnic Tatars can be found – including by the none too Russophilic Guardian – who do not subscribe to the Mejlis’ party line.

Anatoly Karlin – I am a blogger, thinker, and businessman in the SF Bay Area. I’m originally from Russia, spent many years in Britain, and studied at U.C. Berkeley. One of my tenets is that ideologies tend to suck. As such, I hesitate about attaching labels to myself. That said, if it’s really necessary, I suppose “liberal-conservative neoreactionary” would be close enough. Though I consider myself part of the Orthodox Church, my philosophy and spiritual views are more influenced by digital physics, Gnosticism, and Russian cosmism than anything specifically Judeo-Christian.