US to UN: We Can Disregard Int’l Human Rights Treaty

US tells human rights panel that treaty that bans torture, arbitrary killings and detention doesn’t apply to its military operations. 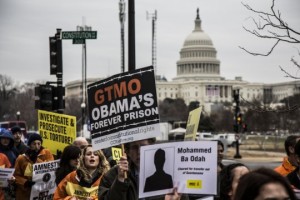 United Nations panel called out the United States’ litany of human rights failures as the U.S. sought to defend its reputation by saying that an international treaty outlying human rights doesn’t apply to its military operations abroad.

The grilling happened Thursday [13 Mar 2014] in Geneva during the first of a two-day session held by the 18-member UN Human Rights Committee that looked at the United States’ implementation of the International Covenant on Civil and Political Rights (ICCPR) — a U.S.-ratified treaty that bans torture, arbitrary killings and detention, and ensures the right to habeas corpus.

During the session, the Guardian reported,

[t]he US came under sustained criticism for its global counter-terrorism tactics, including the use of unmanned drones to kill al-Qaida suspects, and its transfer of detainees to third countries that might practice torture, such as Algeria. Committee members also highlighted the Obama administration’s failure to prosecute any of the officials responsible for permitting waterboarding and other “enhanced interrogation” techniques under the previous administration.

[c]ommittee chair Nigel Rodley, a British law professor and former U.N. investigator on torture, suggested lawyers in the Bush administration who drew up memorandums justifying the use of harsh interrogation techniques could also be liable.

“When evidently seriously flawed legal opinions are issued which then are used as a cover for the committing of serious crimes, one wonders at what point the authors of such opinions may themselves have to be considered part of the criminal plan in the first place?” Rodley said.

“Of course we know that so far there has been impunity.”

Yet the U.S. sought to shield itself from criticism, the New York Times reported, by saying that the rights treaty

imposes no human rights obligations on American military and intelligence forces when they operate abroad, rejecting an interpretation by the United Nations and the top State Department lawyer during President Obama’s first term.

“The United States continues to believe that its interpretation — that the covenant applies only to individuals both within its territory and within its jurisdiction — is the most consistent with the covenant’s language and negotiating history,” the Times reports Mary McLeod, the State Department’s acting legal adviser, as saying during the session.

“This world is an unsafe place,” countered Walter Kalin, a Swiss professor of constitutional and international law who sits on the panel. “Will it not become even more dangerous if any state would be willing to claim that international law does not prevent them from committing human rights violations abroad?”

The U.S. delegation told the panel that its drone strikes were “in compliance with international law.”

The U.S. is constantly talking about “human rights,” Kimber Heinz, Organizing Coordinator with War Resisters League, told Common Dreams. But, as in the case of Venezuela, that language is manipulated to serve what could be disruptive for the current government. When the U.S. uses a human rights framework, “it’s speaking out of both sides of its mouth,” she added, and pointed to the example of the U.S. continuing to pour military aid into Egypt.

“All we can do,” Heinz continued, “is to try to pressure Congress members to implement something like the Leahy Law that implements human rights” because right now “there is no political will.”  Change, she said,  is going to come via the grassroots.

“We are the people, as a movement, as organizations, as people who care — we are the human rights movement.  We have to put pressure on and create new parameters of the conversation about what constitutes human rights,” she said.

The UN panel also urged the U.S. to disclose the Senate report on the CIA torture and rendition program.

“The U.S. shortcomings are highlighted by the committee’s sharp questions on everything from drone killings and NSA surveillance to the humane treatment of immigrants and prisoners, especially discrimination against minorities,” stated ACLU Human Rights Program Director Jamil Dakwar, who was in Geneva for the session.