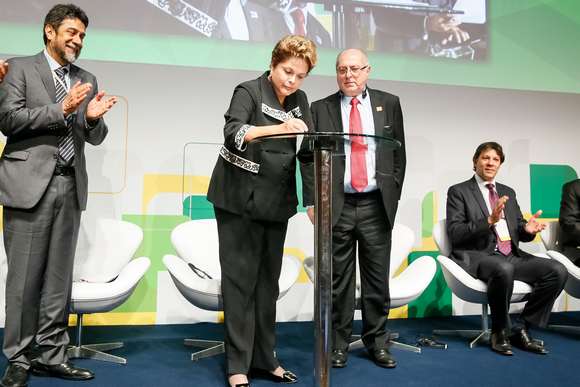 Speaking at the opening of the NETMundial (WorldNET) conference she convened following revelations last year that U.S. security agencies used the Internet to spy on heads of state, ordinary citizens and corporations around the globe, Rousseff said such misuse of the web was “unacceptable.”

“These actions … continue to be unacceptable, they threaten the very nature of the Internet,” said Rousseff, adding that, “The rights that people have off-line must also be protected online.”

The two-day forum brings together Tim Berners-Lee, best known as the inventor of the World Wide Web, and representatives from nearly 90 countries, to discuss Internet governance.

Rousseff, who canceled a state visit to Washington last year after documents leaked by intelligence contractor-turned- whistleblower Edward Snowden showed her emails were intercepted by the U.S. National Security Agency, praised the U.S. government for its recent efforts to scale back its control over the Internet.

“I welcome the U.S. government’s initiative to substitute its institutional links to the IANA and the ICANN (the U.S.-based agencies in charge of designating web domains and addresses) in favor of the global management of these institutions,” she said.

The U.S. government has said it will relinquish control of the agencies in September of next year on condition that it does not come under the control of other governments.

During the conference, Rousseff signed into law Brazil’s Internet privacy bill, which was passed late Tuesday by legislators and praised by Berners-Lee.

He urged all countries to follow the example set by Brazil and Europe, which has also instituted laws to protect online users.