Let This Earth Day Be the Last 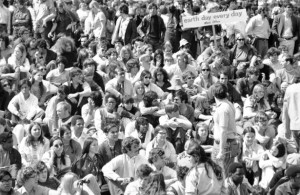 “If there is no struggle there is no progress. Those who profess to favor freedom and yet deprecate agitation are men who want crops without plowing up the ground; they want rain without thunder and lightning. They want the ocean without the awful roar of its many waters. This struggle may be a moral one, or it may be a physical one, and it may be both moral and physical, but it must be a struggle.”
—Frederick Douglass, 1857

No, really. Fuck Earth Day. Not the first one, forty-four years ago, the one of sepia-hued nostalgia, but everything the day has since come to be: the darkest, cruellest, most brutally self-satirizing spectacle of the year.

Fuck it. Let it end here.

End the dishonesty, the deception. Stop lying to yourselves, and to your children. Stop pretending that the crisis can be “solved,” that the planet can be “saved,” that business more-or-less as usual—what progressives and environmentalists have been doing for forty-odd years and more—is morally or intellectually tenable. Let go of the pretense that “environmentalism” as we know it—virtuous green consumerism, affluent low-carbon localism, head-in-the-sand conservationism, feel-good greenwashed capitalism—comes anywhere near the radical response our situation requires.

So, yeah, I’ve had it with Earth Day—and the culture of progressive green denial it represents.

But why Frederick Douglass? Why bring him into this? And who am I to invoke him—a man who was born a slave and who freed himself from slavery, who knew something about struggle, whose words were among the most radical ever spoken on American soil? Who the hell am I? I’ve never suffered racial or any other kind of oppression. I’ve never had to fight for any fundamental rights. I’m not even a radical, really. (Nor am I an “environmentalist”—and never have been.) All I want is a livable world, and the possibility of social justice. So who am I to quote Frederick Douglass?

Let me tell you who I am: I’m a human being. I’m the father of two young children, a 14-year-old son and a 10-year-old daughter, who face a deeply uncertain future on this planet. I’m a husband, a son, a brother—and a citizen. And, yes, I’m a journalist, and I’m an activist. And like more and more of us who are fighting for climate justice, I am engaged in a struggle—a struggle—for the fate of humanity and of life on Earth. Not a polite debate around the dinner table, or in a classroom, or an editorial meeting—or an Earth Day picnic. I’m talking about a struggle. A struggle for justice on a global scale. A struggle for human dignity and human rights for my fellow human beings, beginning with the poorest and most vulnerable, far and near. A struggle for my own children’s future—but not only my children, all of our children, everywhere. A life-and-death struggle for the survival of all that I love. Because that is what the climate fight and the fight for climate justice is. That’s what it is.

Because, I’m sorry, this is not a test. This is really happening. The Arctic and the glaciers are melting. The great forests are dying and burning. The oceans are rising and acidifying. The storms, the floods—the droughts and heat waves—are intensifying. The breadbaskets are parched and drying. And all of it faster and sooner than scientists predicted. The window in which to act is closing before our eyes.

Any discussion of the situation must begin by acknowledging the science and the sheer lateness of the hour—that the chance for any smooth, gradual transition has passed, that without radical change the kind of livable and just future we all want is simply inconceivable. The international community has, of course, committed to keeping the global temperature from rising more than two degrees Celsius (3.6 F) above the preindustrial average—the level, we’re told, at which “catastrophic” warming can still be avoided (we’ve already raised it almost one degree, with still more “baked in” within coming decades). But there’s good reason to believe that a rise of two degrees will lead to catastrophic consequences. And of course, what’s “catastrophic” depends on where you live, and how poor you are, and more often than not the color of your skin. If you’re one of the billions of people who live in the poorest and most vulnerable places—from Bangladesh to Louisiana—even 1 degree can mean catastrophe.

But the world’s climate scientists and leading energy experts are telling us that unless the major economies drastically and immediately change course—leaving all but a small fraction of fossil fuel reserves in the ground over the next four decades—we are headed for a temperature rise of four or five or even six degrees C within this century. The World Bank has warned that four degrees “must be avoided.” But we’re not avoiding it. Global emissions are still rising each year. We’re plunging headlong toward the worst-case scenarios—critical global food and water shortages, rapid sea-level rise, social upheaval—and beyond.

The question is not whether we’re going to “stop” global warming, or “solve” the climate crisis; it is whether humanity will act quickly and decisively enough now to save civilization itself—in any form worth saving. Whether any kind of stable, humane and just future—any kind of just society—is still possible.

We know that if the governments of the world actually wanted to address this situation in a serious way, they could. Indeed, a select few, such as Germany, have begun to do so. It can be done—and at relatively low cost. And yet the fossil-fuel industry, and those who do its bidding, have been engaged in a successful decades-long effort to sow confusion, doubt and opposition—and to obstruct any serious policies that might slow the warming, or their profits, and buy us time.

As I’ve said elsewhere, let’s be clear about what this means: at this late date, given what we know and have known for decades, to willfully obstruct any serious response to global warming is to knowingly allow entire countries and cultures to disappear. It is to rob the poorest and most vulnerable people on the planet of their land, their homes, their livelihoods, even their lives and their children’s lives—and their children’s children’s lives. For money. For political power.

What, are you shocked? The same industry, the same people committing these crimes—while we subsidize them for their trouble—have been getting away with murder along the fence lines and front lines for generations.

What is the proper response to this? How should I respond?

How about this? Masses of people—most of them young, a generation with little or nothing to lose—physically, nonviolently disrupting the fossil-fuel industry and the institutions that support it and abet it. Getting in the way of business as usual. Forcing the issue. Finally acting as though we accept what the science is telling us.

Um, isn’t that a bit extreme? you ask.

Really? You want extreme? Business as usual is extreme. Just ask a climate scientist. The building is burning. The innocents—the poor, the oppressed, the children, your own children—are inside. And the American petro state is spraying fuel, not water, on the flames. That’s more than extreme. It’s homicidal. It’s psychopathic. It’s fucking insane.

Coming to grips with the climate crisis is hard. A friend of mine says it’s like walking around with a knife in your chest. I couldn’t agree more.

So I ask again, in the face of this situation, how does one respond? Many of us, rather than retreat into various forms of denial and fatalism, have reached the conclusion that something more than “environmentalism” is called for, and that a new kind of movement is the only option. That the only thing, at this late hour, offering any chance of averting an unthinkable future—and of getting through the crisis that’s already upon us—is the kind of radical social and political movement that has altered the course of history in the past. A movement far less like contemporary environmentalism and far more like the radical human rights, social justice and liberation struggles of the nineteenth and twentieth centuries.

Does that sound hopelessly naïve to you? Trust me, I get it. I know. I know how it sounds.

And yet here I am. Because I also know that abolishing slavery sounded hopeless and naïve in 1857, when Frederick Douglass spoke of struggle.

What I’m talking about is not a fight to “solve the climate crisis.” That’s not possible anymore. But neither is it simply a fight for human survival—because there are oppressive and dystopian forms of survival, not to mention narcissistic ones, that aren’t worth fighting for.

What I’m talking about is both a fight for survival and a fight for justice—for even the possibility of justice. It’s a fight that transcends environmentalism. It requires something of us beyond the usual politics and proposals, the usual pieties. It requires the kind of commitment you find in radical movements—the kind of struggles, from abolition to women’s, labor and civil rights, that have made possible what was previously unimaginable.

Because our global crisis—not merely environmental but moral and spiritual—is fundamental: it strikes to the root of who we are. It’s a radical situation, requiring a radical response. Not merely radical in the sense of ideology, but a kind of radical necessity. It requires us to find out who we really are—and, nonviolently, in the steps of Gandhi and King and many others, to act. In some cases, to lay everything—everything—on the line.

And it requires us to be honest, with one another and with ourselves, about the situation we face. We’ll never have a movement radical enough, or humane enough, until we are.

That is, until Earth Day is buried—and a day of reckoning begins.

Wen Stephenson is an independent journalist and climate activist at work on a book about the climate-justice movement. A former editor at The Atlantic and at The Boston Globe, he was most recently the senior producer of NPR’s On Point. He has written about climate, culture and politics for The Boston Phoenix, Grist, Slate, The New York Times, and the Globe. On Twitter: @wenstephenson.