The Change Within: The Obstacles We Face Are Not Just External

The climate crisis has such bad timing, confronting it not only requires a new economy but a new way of thinking. 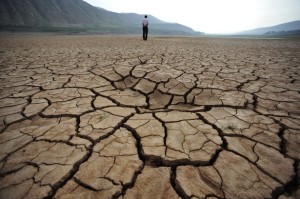 This is a story about bad timing.

One of the most disturbing ways that climate change is already playing out is through what ecologists call “mismatch” or “mistiming.” This is the process whereby warming causes animals to fall out of step with a critical food source, particularly at breeding times, when a failure to find enough food can lead to rapid population losses.

The migration patterns of many songbird species, for instance, have evolved over millennia so that eggs hatch precisely when food sources such as caterpillars are at their most abundant, providing parents with ample nourishment for their hungry young. But because spring now often arrives early, the caterpillars are hatching earlier too, which means that in some areas they are less plentiful when the chicks hatch, threatening a number of health and fertility impacts. Similarly, in West Greenland, caribou are arriving at their calving grounds only to find themselves out of sync with the forage plants they have relied on for thousands of years, now growing earlier thanks to rising temperatures. That is leaving female caribou with less energy for lactation, reproduction and feeding their young, a mismatch that has been linked to sharp decreases in calf births and survival rates.

Scientists are studying cases of climate-related mistiming among dozens of species, from Arctic terns to pied flycatchers. But there is one important species they are missing—us. Homo sapiens. We too are suffering from a terrible case of climate-related mistiming, albeit in a cultural-historical, rather than a biological, sense. Our problem is that the climate crisis hatched in our laps at a moment in history when political and social conditions were uniquely hostile to a problem of this nature and magnitude—that moment being the tail end of the go-go ’80s, the blastoff point for the crusade to spread deregulated capitalism around the world. Climate change is a collective problem demanding collective action the likes of which humanity has never actually accomplished. Yet it entered mainstream consciousness in the midst of an ideological war being waged on the very idea of the collective sphere.

This deeply unfortunate mistiming has created all sorts of barriers to our ability to respond effectively to this crisis. It has meant that corporate power was ascendant at the very moment when we needed to exert unprecedented controls over corporate behavior in order to protect life on earth. It has meant that regulation was a dirty word just when we needed those powers most. It has meant that we are ruled by a class of politicians who know only how to dismantle and starve public institutions, just when they most need to be fortified and reimagined. And it has meant that we are saddled with an apparatus of “free trade” deals that tie the hands of policy-makers just when they need maximum flexibility to achieve a massive energy transition.

Confronting these various structural barriers to the next economy is the critical work of any serious climate movement. But it’s not the only task at hand. We also have to confront how the mismatch between climate change and market domination has created barriers within our very selves, making it harder to look at this most pressing of humanitarian crises with anything more than furtive, terrified glances. Because of the way our daily lives have been altered by both market and technological triumphalism, we lack many of the observational tools necessary to convince ourselves that climate change is real—let alone the confidence to believe that a different way of living is possible.

This is our climate change mismatch, and it affects not just our species, but potentially every other species on the planet as well.

The good news is that, unlike reindeer and songbirds, we humans are blessed with the capacity for advanced reasoning and therefore the ability to adapt more deliberately—to change old patterns of behavior with remarkable speed. If the ideas that rule our culture are stopping us from saving ourselves, then it is within our power to change those ideas. But before that can happen, we first need to understand the nature of our personal climate mismatch.

› Climate change demands that we consume less, but being consumers is all we know. Climate change is not a problem that can be solved simply by changing what we buy—a hybrid instead of an SUV, some carbon offsets when we get on a plane. At its core, it is a crisis born of overconsumption by the comparatively wealthy, which means the world’s most manic consumers are going to have to consume less.

The problem is not “human nature,” as we are so often told. We weren’t born having to shop this much, and we have, in our recent past, been just as happy (in many cases happier) consuming far less. The problem is the inflated role that consumption has come to play in our particular era.

Late capitalism teaches us to create ourselves through our consumer choices: shopping is how we form our identities, find community and express ourselves. Thus, telling people that they can’t shop as much as they want to because the planet’s support systems are overburdened can be understood as a kind of attack, akin to telling them that they cannot truly be themselves. This is likely why, of the original “Three Rs”—reduce, reuse, recycle—only the third has ever gotten any traction, since it allows us to keep on shopping as long as we put the refuse in the right box. The other two, which require that we consume less, were pretty much dead on arrival.

› Climate change is slow, and we are fast. When you are racing through a rural landscape on a bullet train, it looks as if everything you are passing is standing still: people, tractors, cars on country roads. They aren’t, of course. They are moving, but at a speed so slow compared with the train that they appear static.

So it is with climate change. Our culture, powered by fossil fuels, is that bullet train, hurtling forward toward the next quarterly report, the next election cycle, the next bit of diversion or piece of personal validation via our smartphones and tablets. Our changing climate is like the landscape out the window: from our racy vantage point, it can appear static, but it is moving, its slow progress measured in receding ice sheets, swelling waters and incremental temperature rises. If left unchecked, climate change will most certainly speed up enough to capture our fractured attention—island nations wiped off the map, and city-drowning superstorms, tend to do that. But by then, it may be too late for our actions to make a difference, because the era of tipping points will likely have begun.

This article appeared in the May 12, 2014 edition of The Nation.