Why US Fracking Companies Are Licking Their Lips over Ukraine

From climate change to Crimea, the natural gas industry is supreme at exploiting crisis for private gain – what I call the shock doctrine. 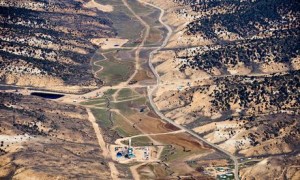 A large field of fracking sites in a Colorado valley. ‘The industry’s singular solution to the climate crisis is to dramatically expand an extraction process that releases massive amounts of climate-destabilising methane.’ Photograph: Ted Wood/Aurora Photos/Corbis

The way to beat Vladimir Putin is to flood the European market with fracked-in-the-USA natural gas, or so the industry would have us believe. As part of escalating anti-Russian hysteria, two bills have been introduced into the US Congress – one in the House of Representatives (H.R. 6), one in the Senate (S. 2083) – that attempt to fast-track liquefied natural gas (LNG) exports, all in the name of helping Europe to wean itself from Putin’s fossil fuels, and enhancing US national security.

According to Cory Gardner, the Republican congressman who introduced the House bill, “opposing this legislation is like hanging up on a 911 call from our friends and allies”. And that might be true – as long as your friends and allies work at Chevron and Shell, and the emergency is the need to keep profits up amid dwindling supplies of conventional oil and gas.

For this ploy to work, it’s important not to look too closely at details. Like the fact that much of the gas probably won’t make it to Europe – because what the bills allow is for gas to be sold on the world market to any country belonging to the World Trade Organisation.

Or the fact that for years the industry has been selling the message that Americans must accept the risks to their land, water and air that come with hydraulic fracturing (fracking) in order to help their country achieve “energy independence”. And now, suddenly and slyly, the goal has been switched to “energy security”, which apparently means selling a temporary glut of fracked gas on the world market, thereby creating energy dependencies abroad.

And most of all, it’s important not to notice that building the infrastructure necessary to export gas on this scale would take many years in permitting and construction – a single LNG terminal can carry a $7bn price tag, must be fed by a massive, interlocking web of pipelines and compressor stations, and requires its own power plant just to generate energy sufficient to liquefy the gas through super-cooling. By the time these massive industrial projects are up and running, Germany and Russia may well be fast friends. But by then few will remember that the crisis in Crimea was the excuse seized upon by the gas industry to make its longstanding export dreams come true, regardless of the consequences to the communities getting fracked or to the planet getting cooked.

I call this knack for exploiting crisis for private gain the shock doctrine, and it shows no signs of retreating. We all know how the shock doctrine works: during times of crisis, whether real or manufactured, our elites are able to ram through unpopular policies that are detrimental to the majority under cover of emergency. Sure there are objections – from climate scientists warning of the potent warming powers of methane, or local communities that don’t want these high-risk export ports on their beloved coasts. But who has time for debate? It’s an emergency! A 911 call ringing! Pass the laws first, think about them later.

Plenty of industries are good at this ploy, but none is more adept at exploiting the rationality-arresting properties of crisis than the global gas sector.

For the past four years the gas lobby has used the economic crisis in Europe to tell countries like Greece that the way out of debt and desperation is to open their beautiful and fragile seas to drilling. And it has employed similar arguments to rationalise fracking across North America and the United Kingdom.

Now the crisis du jour is conflict in Ukraine, being used as a battering ram to knock down sensible restrictions on natural gas exports and push through a controversial free-trade deal with Europe. It’s quite a deal: more corporate free-trade polluting economies and more heat-trapping gases polluting the atmosphere – all as a response to an energy crisis that is largely manufactured.

Against this backdrop it’s worth remembering – irony of ironies – that the crisis the natural gas industry has been most adept at exploiting is climate change itself.

Never mind that the industry’s singular solution to the climate crisis is to dramatically expand an extraction process in fracking that releases massive amounts of climate-destabilising methane into our atmosphere. Methane is one of the most potent greenhouse gases – 34 times more powerful at trapping heat than carbon dioxide, according to the latest estimates by the Intergovernmental Panel on Climate Change. And that is over a 100-year period, with methane’s power dwindling over time.

It’s far more relevant, argues the Cornell University biochemist Robert Howarth, one of the world’s leading experts on methane emissions, to look at the impact in the 15- to 20-year range, when methane has a global-warming potential that is a staggering 86-100 times greater than carbon dioxide. “It is in this time frame that we risk locking ourselves into very rapid warming,” he said on Wednesday.

And remember: you don’t build multibillion-dollar pieces of infrastructure unless you plan on using them for at least 40 years. So we are responding to the crisis of our warming planet by constructing a network of ultra-powerful atmospheric ovens. Are we mad?

Not that we know how much methane is actually released by drilling and fracking and all their attendant infrastructure. Even while the natural gas industry touts its “lower than coal!” carbon dioxide emissions, it has never systematically measured its fugitive methane leaks, which waft from every stage of the gas extraction, processing, and distribution process – from the well casings and the condenser valves to the cracked pipelines under Harlem neighbourhoods. The gas industry itself, in 1981, came up with the clever pitch that natural gas was a “bridge” to a clean energy future. That was 33 years ago. Long bridge. And the far bank still nowhere in view.

And in 1988 – the year that the climatologist James Hansen warned Congress, in historic testimony, about the urgent problem of global warming – the American Gas Association began to explicitly frame its product as a response to the “greenhouse effect”. It wasted no time, in other words, selling itself as the solution to a global crisis that it had helped create.

The industry’s use of the crisis in Ukraine to expand its global market under the banner of “energy security” must be seen in the context of this uninterrupted record of crisis opportunism. Only this time many more of us know where true energy security lies. Thanks to the work of top researchers such as Mark Jacobson and his Stanford team, we know that the world can, by the year 2030, power itself entirely with renewables. And thanks to the latest, alarming reports from the IPCC, we know that doing so is now an existential imperative.

This is the infrastructure we need to be rushing to build – not massive industrial projects that will lock us into further dependency on dangerous fossil fuels for decades into the future. Yes, these fuels are still needed during the transition, but more than enough conventionals are on hand to carry us through: extra-dirty extraction methods such as tar sands and fracking are simply not necessary. As Jacobson said in an interview just this week: “We don’t need unconventional fuels to produce the infrastructure to convert to entirely clean and renewable wind, water and solar power for all purposes. We can rely on the existing infrastructure plus the new infrastructure [of renewable generation] to provide the energy for producing the rest of the clean infrastructure that we’ll need … Conventional oil and gas is much more than enough.”

Given this, it’s up to Europeans to turn their desire for emancipation from Russian gas into a demand for an accelerated transition to renewables. Such a transition – to which European nations are committed under the Kyoto protocol – can easily be sabotaged if the world market is flooded with cheap fossil fuels fracked from the US bedrock. And indeed Americans Against Fracking, which is leading the charge against the fast-tracking of LNG exports, is working closely with its European counterparts to prevent this from happening.

Responding to the threat of catastrophic warming is our most pressing energy imperative. And we simply can’t afford to be distracted by the natural gas industry’s latest crisis-fuelled marketing ploy.