[An Antithesis of Peace Journalism]: 1,000 Days of Syria – Turning War Journalism into a Game

How an American journalist is attempting to tell the story of Syria’s violence through an online adventure game. 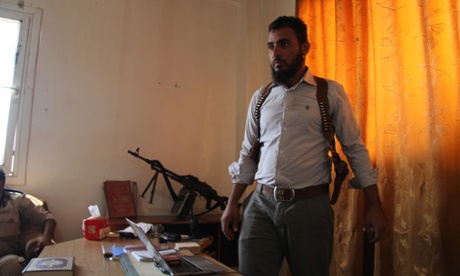 The sound of a gunshot rattled against the back of Mitch Swenson’s teeth as he sprinted across a Turkish field. If the guards had fired to scare rather than wound, the warning had its intended effect.

Swenson, a 26-year-old in his final year of a creative non-fiction course at Columbia University, was utterly terrified. As he and his three accomplices pressed through a tight hole in the fence, stepping into an unexpectedly peaceful Syrian pomegranate orchard, the relief was palpable, even if it was short-lived.

This was not, as Swenson describes his journey into a war zone, his “first rodeo”. In 2011, he found himself in Cairo’s Tahrir Square on the first day of the revolution that helped instigate the Arab Spring. Since then he’s visited a clutch of troubled nations: Libya, South Sudan and the Democratic Republic of the Congo. “I’ve been around men with guns before,” he says.

Even so, this murky night was different. “Syria is a type of conflict that humanity has never really seen before,” explains Swenson. “All of the rules are out of the window.”

For the next 10 days he and his partners (David Axe, the founder of War is Boring, a blog that covers warzones, a photographer, and a local fixer) travelled with members of the Sham Falcon’s Brigade, a group opposed to the Syrian president Bashar al-Assad and his troops. The rebels provided transport in exchange for food and diesel fuel.

Swenson and his crew were some of the few foreign journalists left in the country; the dangers were extreme. The preceding day two Spanish journalists had been kidnapped while preparing to leave the country (they were eventually released in March).

During his short time in Syria, Swenson interviewed soldiers and smugglers and saw first-hand what he describes as an “all-purveying, all-consuming, merciless, heart-eating, machine of war.” But on 4 October he left. He was due to start at college the following week.

When Swenson landed in New York, he found that Syria was some way down the popular news agenda. “I heard that nine times as many people clicked on links to do with Miley Cyrus than the war,” he recalls. “When you consider what would have been more impactful, I think going to war has far greater consequence than a salacious performance by a pop star.”

Swenson wrote about his experiences, but wanted to find another way to communicate something of what he had witnessed, a country riddled with chaos and psychologically pockmarked by the president’s illegal chemical attacks on his own people. How to interest an uninterested populace in this seemingly remote nation?

Turning terror into a game

He settled upon the idea of an online game. Swenson describes 1,000 Days of Syria, which is freely available to play on the internet, as “part electric literature; part newscast; and part choose-your-own-adventure.” You follow one of three narratives, that of a foreign photojournalist, a mother of two living in Daraa or a rebel youth living in Aleppo.

The story is delivered in disparate chunks and, at the end of each excerpt, you make choices about what to do next: will you attempt to flee the country or stay put? How will you try to pass the time when you’re imprisoned in a dimly lit cell? Each character has three possible endings and, at times, their stories intersect.

In his attempt to explain the first three years of the Syrian conflict, Swenson relies on lengthy exposition, yet the tales are at times affecting, not least because they are based upon his own experience and the experience of those he interviewed first hand in the country.

Swenson believes that there are numerous advantages to employing an interactive medium over traditional non-interactive storytelling.

“I was able to incorporate some of the details from my notebooks into the historical nonfiction aspect of the game that were not pertinent to reporting,” he says. “In that way I could tell more of a full-bodied experience of what’s going on there.”

There’s also the fact that, by placing the player in the role of these characters, with a certain degree of agency, empathy and connection is built in a different way to linear media such as film and literature.

The power of words

The writer has shied away from the use of photography or film in the game, which is entirely constructed from text. “Photographs can take away from some of the intensity,” he says. “Sometimes when I see a video of something going on in Syria it doesn’t always seem real. Descriptive text can, in some way, be a great deal more humanising. For example, even if you watch a CGI image of a child as they choke on Sarin gas, there is still a level of disconnect. But text illuminates the humanity behind everything that’s going on in a place.”

Illuminating humanity is Swenson’s primary aim with the project. “I thought if I made an interactive game that explains how things unravelled it might garner some attention to a conflict that I am concerned is being forgotten, especially in the light of developments in Ukraine,” he says.

“Perhaps this will be a way for people that wouldn’t be interested to engage with the conflict. If 1,000 Days of Syria can at least inform and perhaps motivate an otherwise naive few, the mission of the game will have been a success.”

• 1,000 Days of Syria can be played for free online. The Guardian’s coverage of the conflict can be found in the Syria section of our website

• News as games: immoral or the future of interactive journalism?