The attempt to lever Kiev into the western camp by ousting an elected leader made conflict certain. It could be a threat to us all. 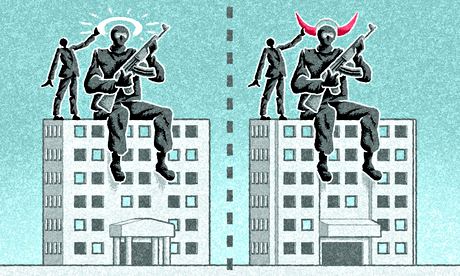 ‘The reality is that after two decades of Nato expansion, this crisis was triggered by the west’s attempt to pull Ukraine decisively into its orbit … ‘ Illustration: Matt Kenyon

The threat of war in Ukraine is growing. As the unelected government in Kiev declares itself unable to control the rebellion in the country’s east, John Kerry brands Russia a rogue state. The US and the European Union step up sanctions against the Kremlin, accusing it of destabilising Ukraine. The White House is reported to be set on a new cold war policy with the aim of turning Russia into a “pariah state”.

That might be more explicable if what is going on in eastern Ukraine now were not the mirror image of what took place in Kiev a couple of months ago. Then, it was armed protesters in Maidan Square seizing government buildings and demanding a change of government and constitution. US and European leaders championed the “masked militants” and denounced the elected government for its crackdown, just as they now back the unelected government’s use of force against rebels occupying police stations and town halls in cities such as Slavyansk and Donetsk.

“America is with you,” Senator John McCain told demonstrators then, standing shoulder to shoulder with the leader of the far-right Svoboda party as the US ambassador haggled with the state department over who would make up the new Ukrainian government.

When the Ukrainian president was replaced by a US-selected administration, in an entirely unconstitutional takeover, politicians such as William Hague brazenly misled parliament about the legality of what had taken place: the imposition of a pro-western government on Russia’s most neuralgic and politically divided neighbour.

Putin bit back, taking a leaf out of the US street-protest playbook – even though, as in Kiev, the protests that spread from Crimea to eastern Ukraine evidently have mass support. But what had been a glorious cry for freedom in Kiev became infiltration and insatiable aggression in Sevastopol and Luhansk.

After Crimeans voted overwhelmingly to join Russia, the bulk of the western media abandoned any hint of even-handed coverage. So Putin is now routinely compared to Hitler, while the role of the fascistic right on the streets and in the new Ukrainian regime has been airbrushed out of most reporting as Putinist propaganda.

So you don’t hear much about the Ukrainian government’s veneration of wartime Nazi collaborators and pogromists, or the arson attacks on the homes and offices of elected communist leaders, or the integration of the extreme Right Sector into the national guard, while the anti-semitism and white supremacism of the government’s ultra-nationalists is assiduously played down, and false identifications of Russian special forces are relayed as fact.

The reality is that, after two decades of eastward Nato expansion, this crisis was triggered by the west’s attempt to pull Ukraine decisively into its orbit and defence structure, via an explicitly anti-Moscow EU association agreement. Its rejection led to the Maidan protests and the installation of an anti-Russian administration – rejected by half the country – that went on to sign the EU and International Monetary Fund agreements regardless.

No Russian government could have acquiesced in such a threat from territory that was at the heart of both Russia and the Soviet Union. Putin’s absorption of Crimea and support for the rebellion in eastern Ukraine is clearly defensive, and the red line now drawn: the east of Ukraine, at least, is not going to be swallowed up by Nato or the EU.

But the dangers are also multiplying. Ukraine has shown itself to be barely a functioning state: the former government was unable to clear Maidan, and the western-backed regime is “helpless” against the protests in the Soviet-nostalgic industrial east. For all the talk about the paramilitary “green men” (who turn out to be overwhelmingly Ukrainian), the rebellion also has strong social and democratic demands: who would argue against a referendum on autonomy and elected governors?

Meanwhile, the US and its European allies impose sanctions and dictate terms to Russia and its proteges in Kiev, encouraging the military crackdown on protesters after visits from Joe Biden and the CIA director, John Brennan. But by what right is the US involved at all, incorporating under its strategic umbrella a state that has never been a member of Nato, and whose last elected government came to power on a platform of explicit neutrality? It has none, of course – which is why the Ukraine crisis is seen in such a different light across most of the world. There may be few global takers for Putin’s oligarchic conservatism and nationalism, but Russia’s counterweight to US imperial expansion is welcomed, from China to Brazil.

In fact, one outcome of the crisis is likely to be a closer alliance between China and Russia, as the US continues its anti-Chinese “pivot” to Asia. And despite growing violence, the cost in lives of Russia’s arms-length involvement in Ukraine has so far been minimal compared with any significant western intervention you care to think of for decades.

The risk of civil war is nevertheless growing, and with it the chances of outside powers being drawn into the conflict. Barack Obama has already sent token forces to eastern Europe and is under pressure, both from Republicans and Nato hawks such as Poland, to send many more. Both US and British troops are due to take part in Nato military exercises in Ukraine this summer.

The US and EU have already overplayed their hand in Ukraine. Neither Russia nor the western powers may want to intervene directly, and the Ukrainian prime minister’s conjuring up of a third world war presumably isn’t authorised by his Washington sponsors. But a century after 1914, the risk of unintended consequences should be obvious enough – as the threat of a return of big-power conflict grows. Pressure for a negotiated end to the crisis is essential.

Seumas Milne is a Guardian columnist and associate editor. He was the Guardian’s comment editor from 2001 to 2007 after working for the paper as a general reporter and labour editor. He has reported for the Guardian from the Middle East, eastern Europe, Russia, south Asia and Latin America. He previously worked for the Economist and is the author of The Enemy Within and The Revenge of History and co-author of Beyond the Casino Economy.