Kagame: Murderer of Millions in Congo and Rwanda 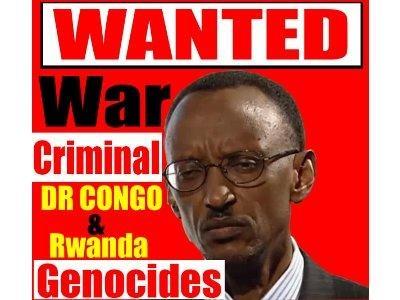 In what may be the world’s most bizarre spectacle, notables from around the globe this year pay homage to Rwandan President Paul Kagame, as if he is the savior of Africa. “For 20 years, Kagame has posed as the soldier who stopped the Rwandan genocide, when all evidence and logic point to him as the main perpetrator of the crime.”

“Thanks to western media, the 1994 bloodbath in Rwanda is almost universally remembered only as a genocide against Tutsis.”

Paul Kagame, the U.S.-backed warlord and dictator of Rwanda, last week accused France and Belgium of complicity in the mass killings in his country 20 years ago. It is true that France and Belgium, along with Britain, Spain, Portugal, Italy, The Netherlands, Denmark and Germany, are collectively responsible for the extermination of hundreds of millions – of whole peoples – all across the globe. However, in the case of the Rwanda genocide of 1994, the main criminals are Paul Kagame, himself, and his allies in neighboring Uganda and in the United States. After the frenzy of killing was done, U.S. President Bill Clinton and Ugandan strongman Yoweri Museveni then joined with Kagame to launch a war against the neighboring Democratic Republic of Congo that has claimed six million lives – the greatest genocide, by far, since World War Two.

Back in 1994, Paul Kagame commanded thousands of Tutsi soldiers who had only recently been part of the Ugandan army, where Kagame served as chief of intelligence. Kagame had also studied at the U.S. Army Command and General Staff College in Fort Leavenworth, Kansas. His men invaded Rwanda, killing thousands of mostly Hutu civilians, in their drive to reestablish minority Tutsi rule over the country. In the midst of peace negotiations, someone shot down the plane that was carrying Rwanda’s Hutu president, Juvenal Habyarimana, and Cyprien Ntaryamira, also a Hutu and president of neighboring Burundi, a country with virtually the same history of Tutsi domination. The deaths of the two Hutu presidents set off renewed fighting – which the United States did nothing to prevent – resulting in the bloody return of the minority Tutsis to power, and the exile of over a million Hutus. Many tens of thousands of Hutus died before the presidents’ plane went down, and many more were slaughtered by Kagame’s forces afterwards but, thanks to western media, the 1994 bloodbath in Rwanda is almost universally remembered only as a genocide against Tutsis.

“The most logical murder suspect is Kagame’s own rebel Tutsi army.”

So, who shot down the presidents’ plane and set off this catastrophic chain of events? Paul Kagame and the United States make the fantastic claim that the Hutus killed their own presidents, in fear that they might sign a peace deal. There is no evidence of such a plot, which sounds counterintuitive on its face. The most logical murder suspect is Kagame’s own rebel Tutsi army,which was formed for the purpose of overthrowing Hutu majority governments in Rwanda and Burundi – that is, to bring down people like the dead presidents.

For 20 years, Kagame has posed as the soldier who stopped the Rwandan genocide, when all evidence and logic point to him being the main perpetrator of the crime. Three U.S. presidents have acted as Kagame’s eager accomplices, using the bloody cloak of Rwanda to carry out a far larger genocide in the eastern Congo, and to justify the bogus doctrine of humanitarian military intervention.

Paul Kagame, like Barack Obama, has an extensive “Kill List,” and sends assassins around the world to knock off his political opponents. His Tutsi regime is the only ethnic minority government left on the African continent – a darker version of apartheid. And yet, for the next several months notables from all around the globe will pay homage to Paul Kagame – a mass murdering thug and assassin – as if he is the savior of Africa.