Welcome to Nulandistan: A Multimedia Look at What the US and EU Have Unleashed on Ukraine 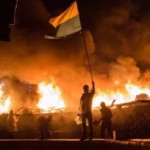 The Yatsenyuk regime’s anti-terrorism operations in the southern and eastern oblasts (region) of Ukraine are really a use of martial force against Ukrainian civilians opposed to the coup-installed regime in Kiev. Predominately peaceful Ukrainian citizens opposing the coup leaders and not “armed separatists”  have been the main target of the regime’s militias.

The discourse about “pro-Russian” separatists is a misleading attempt to hide the real nature of the protests against the regime, which is opposition to a coup. The main issue is one of anti-coup protesters versus a junta and not separatists and federalists versus Kiev. To refer to the junta in Kiev as the government of Ukraine is to reject or ignore its illegality.

Wherever the US government says it is promoting democracy and freedom, as US Assistant-Secretary of State Victoria Nuland professes about Ukraine, there has been destruction, impoverishment, sectarianism, fighting, and death. Welcome to post-coup Ukraine or Nulandistan. It follows the precedents and traditions of destabilization and violence honoured by US officials like Senator John McCain in the Syrian Arab Republic (McCainistan) and by Hillary Clinton in the Libyan Arab Jamahiriya  (Clintonistan).

Arseniy Petrovych Yatsenyuk, who has illegally taken the post of Ukrainian prime minister with the support of the US and European Union, was never favoured by the many of the authentic protesters in Euro-Maidan or even the grassroots members of his allies. When, without any election or public discussion, he was arbitrarily given the office of prime minister, many in the Euro-Maidan protest booed him and some even cried “bullet to his head.” His party boss, the infamously corrupt Yulia Volodymyrivna Tymoshenko, was booed too after she arrived.  In reality, Yatsenyuk and the other Ukrainian politicians like the ultra-nationalist Svoboda’s Oleh Tyahnybok, appropriated the hopes and dreams of the Ukrainians that were protesting against not only the Ukrainian government of Viktor Fedorovych Yanukovych, but the entire corrupt Ukrainian political establishment. Hiding behind the protesters, Yatsenyuk and Tymoshenko’s Batkivshchyna Party used the militias of their ultra-nationalist political allies to launch a violent coup in Kiev.

There is no functioning democracy in Ukraine and, with the full support of the European Union and the US government, free speech inside Ukraine is under attack by the new regime and its thugs. Yatsenyuk’s coup-installed regime has cracked down on media freedoms, sent the Ukrainian military and security forces to attack anti-coup protesters under the pretext of NATO-backed anti-terrorism operations, and started purges and witch hunts all over Ukraine. This started with the head of the National Television Company of Ukraine, Aleksandr Panteleymonov, being threatened and beaten into resigning by Svoboda deputies Igor Miroshnynchenko and  Andrey Ilyenko.

PLEASE CONTINUE READING THE PAPER IN THE ORIGINAL – globalresearch.ca

This article originally appeared on Transcend Media Service (TMS) on 19 May 2014.

Anticopyright: Editorials and articles originated on TMS may be freely reprinted, disseminated, translated and used as background material, provided an acknowledgement and link to the source, TMS: Welcome to Nulandistan: A Multimedia Look at What the US and EU Have Unleashed on Ukraine, is included. Thank you.