Where Should the Divestors Invest? 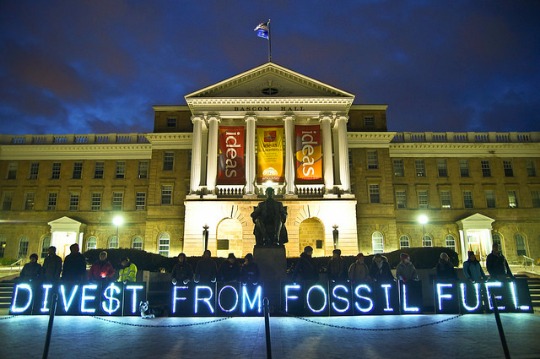 The stunning success of the fossil fuel divestment movement has caught many of us off-guard. Almost daily, new universities and foundations are committing to redirecting their endowments from companies that are destroying the planet into ones that are not. Now, on the heels of their successful campaigns, activists are clamoring for guidance on what types of investments they should advocate for. They know that their victories will be ashes in their mouths if their universities simply divest from Exxon and into a “green” Coca-Cola.

Emulating the anti-apartheid Sullivan Principles, there are efforts under way to certify investments as fossil-free. But a “moral screen” that simply rules out fossil fuel companies and perhaps a few other morally questionable investments is a necessary, but not sufficient, step.

Addressing the climate crisis requires massive investment in rebuilding our society and our economy on a sustainable basis. That means not only a radically different energy system but also transformed food, transportation, building, manufacturing, healthcare, and other systems.  That means not only changes in technology, but also the means to give ordinary people security in the face of change and a stake in its benefits.

We need to direct capital to disruptive innovations that can fundamentally transform our economy and deliver broadly shared benefits. To do this, we need a framework and guiding set of principles for identifying these innovations. We also need to design the mechanisms for channeling capital to these innovations at an unprecedented scale.

The financial infrastructure of the new economy is under-developed. Waiting for Wall Street to deliver the financial instruments we need for a sustainable economy is like waiting for Exxon to build the renewable energy system we need to avert climate catastrophe. It is not going to happen. The movement needs to be equally focused on moving capital out of fossil fuels and into the new economy as it is readying the economy to absorb this new flow of capital.

Of course, any institution is going to have to be mindful of its institutional mission and responsibilities, but as we divest from fossil fuels we should be asking, what is the most good our money can do to create a just and sustainable world?

Currently, the reinvestment question is often approached in terms of an investment screen that rules out socially destructive categories, such as environmental harm, violation of labor rights, and other morally unacceptable activities. The investors themselves can apply such screens or they can invest in “social investment funds” that use them.  But for at least part of their investments, institutions should think in much more positive terms:  How can their money maximize the transition to a new sustainable economy

Here’s one place to start: There are hundreds of community investment funds, socially oriented banks and credit unions, union pension funds, and other financial vehicles that have long experience in investing for social purposes. There are thousands of coops, worker- and community-owned businesses, non-profits, municipal initiatives, and other enterprises that are engaged on a small scale in creating a new economy.

These are the elements of a growing sector of enterprises devoted to public purposes with augmented control by workers and employees.  They are insulating and solarizing buildings; expanding public transportation; developing low-carbon equipment and techniques for schools and hospitals; developing new recycling systems for handling waste.  They are thereby also creating community-based economies that provide economic security, empower local and workplace democracy, and ward off the running away of jobs. But this is a sector that is generally starved for capital.   Expanding the resources to grow this sector as rapidly as possible should be a priority for divestors.

One innovative example of an this type of investment model has emerged in Cleveland, Ohio. A cluster of “anchor institutions,” including Case Western Reserve University, the Cleveland Clinic and the Cleveland Foundation, have pooled endowments in support of the Evergreen Cooperative – a collective of worker-owned businesses made up of an energy-efficient laundry, hydroponic farm and solar installation company. The anchor cluster provides start-up loans and allocates a portion of their procurement dollars to vendors like Evergreen. This dual stroke strategy both spurs local green innovative while ensuring long term stability for locally good and services.

Other investment initiatives are popping up nationwide. Duke University in North Carolina has invested $8 million in the Self-Help Credit Union, in part to fund affordable green housing. Carleton College in Minnesota and Miami University in Florida are directing investment into renewable energy funds. Whether it’s funding green worker-owned coops or credit union solar installation programs, the divestment movement is beginning to leverage its power to build a new sustainable economy for both the planet and local communities.

Another major trend in the works is shifting university and college resources toward implementing Climate Action Plans.  Many of these action plans have been on the books for years, but most have been proceeding at a snail’s pace. The reason? They are starved for the money to invest in clean energy initiatives.

So one obvious place for colleges, universities, municipalities, and other institutions to start is to take the money divested from fossil fuel corporations and invest it in their own CAP programs by reducing energy use and expanding clean energy in their campuses and communities.

But won’t green investment result in a lower “return on investment” for college funds, thereby starving other programs?  Absolutely not.  It’s a little-known fact that the return on investment from programs that reduce greenhouse gas emissions have a far higher rate of return than almost any investment in corporations.

For example, George Washington University recently dedicated $5.3 million to replace outmoded heating and cooling systems. The plan will reduce carbon emissions by 40 percent by the year 2025. According to the University, the entire $5.3 million investment will be recouped in seven years.  And after that the University will save $800,000 a year free and clear on its investment.

A recent study of “green revolving funds” through which colleges invest in increasing their own energy efficiency found “consistent annual returns ranging from 29 percent (Iowa State University) to more than 47 percent (Western Michigan University).  The median annual return on investment was 32%.

That compares to a 7-12% return for typical endowment investments!

Such investments create jobs and purchasing in local communities. Indeed, there is no reason such investments have to be restricted to campuses. Colleges can invest in fossil-fuel reduction programs in their neighborhoods and communities and divide the resulting savings between community institutions and their own endowments.  And as local and state governments join the fossil fuel divestment campaign, they can similarly invest – with profit! – in their own climate-protecting programs.

Such a strategy could kick off with students, but it could become a unifying strategy bringing together workers, environmentalists, and local communities.  It reflects everyone’s interest in protecting the climate.  And at the same time it addresses the desperate need for jobs, economic justice and local development.

Brendan Smith is an oysterman and green labor activist.  He is co-founder of the Labor Network for Sustainability and Global Labor Strategies, and a consulting partner with the Progressive Technology Project. He has worked previously for Congressman Bernie Sanders (I-VT) — both as campaign director and staff on the U.S. House Banking Committee — as well as a broad range of trade unions, grassroots groups and progressive politicians. He is a graduate of Cornell Law School.

Jeremy Brecher is a historian whose new book Save the Humans? Common Preservation in Action, published by Paradigm Publishers, addresses how social movements make social change. His previous books include Strike!, Globalization from Below, and, co-edited with Brendan Smith and Jill Cutler, In the Name of Democracy: American War Crimes in Iraq and Beyond (Metropolitan/Holt). He has received five regional Emmy Awards for his documentary film work. He currently works with the Labor Network for Sustainability.

Kristen Sheeran is Director of Knowledge Systems at Ecotrust, and Executive Director and co-founder of Economics for Equity and Environment Network (E3), a national network of economists developing new arguments for environmental protection. Her research is focused on climate change, environmental policy, political economy, and development. She is co-author of the award-winning book Saving Kyoto (with Graciela Chichilnisky, New Holland, 2009) and has published numerous scholarly articles in Environmental and Resource Economics, Climatic Change, Ecological Economics, and other journals.