2.8-Billion-Year-Old Spheres Found in South Africa: How Were They Made? 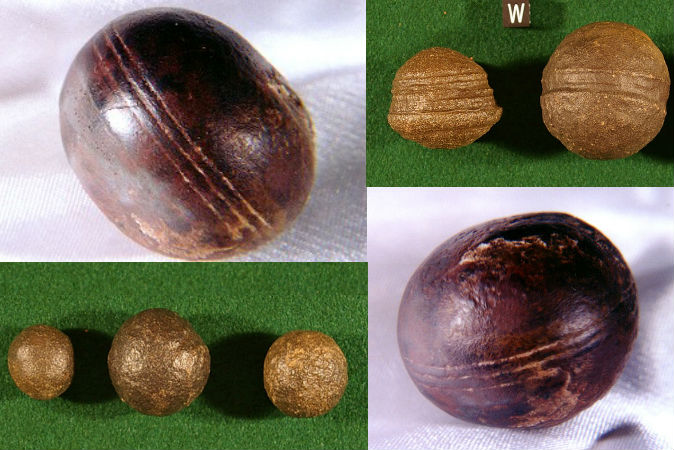 Oopart (out of place artifact) is a term applied to dozens of prehistoric objects found in various places around the world that seem to show a level of technological advancement incongruous with the times in which they were made. Ooparts often frustrate conventional scientists, delight adventurous investigators open to alternative theories, and spark debate.

Spheres found in the mines of South Africa have piqued the curiosity of researchers for decades.

According to Michael Cremo and other researchers of prehistoric culture, these spheres add to a body of evidence suggesting intelligent life existed on Earth long before a conventional view of history places it here.

Cremo has traveled the world gathering information on out-of-place artefacts (ooparts); he compiled his findings in the popular book, “Forbidden Archaeology: The Hidden History of the Human Race.”

In 1984, while investigating the spheres, he contacted Roelf Marx, curator of the museum of Klerksdorp, South Africa, where some of the spheres are kept. Marx described the spheres as being about 2.8 billion years old, with a very hard surface and a fibrous structure inside. He found them quite strange and puzzling.

Marx wrote, according to Cremo: “’There is nothing scientific published about the globes, but the facts are: They are found in pyrophyllite, which is mined near the little town of Ottosdal in the Western Transvaal. This pyrophyllite … is a quite soft secondary mineral with a count of only 3 on the Mohs scale [a scale of 1 to 10 to rank the hardness of minerals] and was formed by sedimentation about 2.8 billion years ago.

“On the other hand, the globes, which have a fibrous structure on the inside with a shell around it, are very hard and cannot be scratched, even by steel. The Mohs scale of hardness is named after Friedrich Mohs, who chose ten minerals as references points for comparative hardness, with talc the softest and diamond the hardest.”

Steel ranks about a 6.5 to 7.5 on the Mohs scale, so the spheres would be harder than that, according to Marx.

Were They Naturally Formed?

Some say the spheres were formed by a natural process of concretion. Concretions are masses of hardened mineral matter.

Some of the so-called Klerksdorp spheres are elliptical in shape with rough ridges around the center. But some are so balanced in shape and proportion, and the grooves around them look so straight and hand-carved, it seems unlikely they were naturally formed, say proponents of the theory that these spheres were made by intelligent beings.

In 2002, the Klerksdorp Museum posted a letter from John Hund of Pietersburg, South Africa, on its website. The claims made in this letter were not verified, according to geologist Paul V. Heinrich, and the letter was later removed. Hund stated that one of the spheres was tested at the California Space Institute, and scientists concluded that its balance “is so fine, it exceeded the limit of their measuring technology.” It was “within one-hundred thousandths of an inch from absolute perfection.”

Heinrich did not find the South African spheres he studied perfectly balanced and shaped.

In Utah, similar spheres were found. They are about 2 million years old, and they are known as Moqui marbles or Moqui balls. Legend holds that the departed ancestors of the Hopi Native Americans would play games with the marbles and leave them as messages to their relatives that they are happy and well.

Various theories for exactly how these spheres may have been made are presented by those who say they are natural phenomena. Dr. Karrie Weber at the University of Nebraska–Lincoln is researching microbes that she has said may have helped form the spheres out of the by-products of its life processes.

Geologist Dave Crosby, who has done research in Utah where the Moqui marbles are found, originally hypothesized that a meteor impact scattered molten spheres that then condensed on sand grains. Upon closer examination, as explained on RocksandMinerals.com, he found no evidence of a meteor impact. He then developed a theory that involves rainwater dissolving iron and other minerals and carrying them to the groundwater. As they flow through the groundwater, the ions are deposited around sand grains forming spheres.

Cremo, and others who hold that ooparts are evidence of advanced prehistoric civilizations, say mainstream scientists need to be more bold and more willing to acknowledge evidence that could contradict dominant views.