Democracy is a core feature of Western society, normally understood as representative parliament – i.e. in free elections citizens vote for people to represent their interests for a parliament consisting of parties of which some form the government and some the opposition.

It’s not always included in the definitions that democracy requires a reasonable level of knowledge and information, freely available. For instance, one often hears that India is the world’s biggest democracy but 26% of the people are still illiterate (287 million people).

So the “world’s largest democracy” also has the world’s largest population who can’t read and write. In comparison, China illiterate citizens make up about 3% and is regularly called a dictatorship.

Also, in a society where the persons running for office are – or have to be – extremely wealthy to pay for their campaign and where large corporations make multi-million dollar contributions to certain candidates (presumably not out of altruism), falls outside a reasonable definition of democracy – even though they may also not be dictatorships; there are many stations in-between the two.

When I was in my high-school years – a few decades ago – and wanted to contribute to changing society for the better, the most natural thing to do – and the finest – was to join a political party. Not so today. My students in peace studies around the world often ask me at the end of a course and it is time to say goodbye whether I can help them somehow in making their career. Their career dreams may be to work for the UN, for human rights, the environment or starting their own NGO with a peace profile or set up their own consultancy firm for a better world.

Significantly, over all these years, only one single student asked me what I thought about contributing to peace and development by becoming a politician.

As is well-known, people today engage in social issues mainly through civil society and the use of social media as their primary tool. This is good from most perspectives and holds fascinating prospects for de facto global citizenship and action, but it does something to the old type of representative democracy.

When we talk about global crisis, people think much more of the environment, identity issues or warfare than of democracy being in crisis. I think it is in fundamental crisis for the the following reasons.

The state of democracy – 10 points

1. The state is being challenged from below and from above.
Democracy is tied to the state, to ”my country”, and not to the world society. But the state is getting weaker due to pressures from both below and above. It’s often stated that global problems can only be solved by supra-national co-operation but those issues are discussed in various interest and regional associations and ad hoc forums. There are no democratic decision-making mechanisms at the global level.

2. Economic aspects dominate
Most of what is discussed in democracies are related to the economy, and that further reduced to the politics of the wallet. The pervasive focus on economy signifies that, over time, national politics has become a – relatively powerless – tool in trying to adjust the economic globalisation that is roaring ahead – anything but confined to the single country, but truly globalising.

3. Materialism over life values
Parliamentary democracy’s obsession with economics makes it uninteresting for those who believe that democratic debate should also deal with values, ethics, concepts such as justice and peace. Over time democracies have phased out every quality of intellectualism and philosophy – even discussions of visions of the better future society.

4. A time horizon far too short
The perspective of 4 years – form one election to the next – is of course hopelessly inadequate in a world that is haunted by problems the solutions of which would require that we all operated with a time horizon of, say, 10-25 years. The visionary politician who has a long-term vision simply doesn’t fit.

6. Global economy and military but only national democracy
But the true globalising sectors of our societies are the corporate world (economy) and the military. The elites in those two think in terms of one world. Democracy’s perhaps biggest problem in this respect is that we don’t have even the embryo of a global democracy that can match these two powerful actors.

7. Politicians must choose between getting elected and speaking the truth
Candidates in democratic election campaigns can’t be honest even if they want to. Any candidate has to promise ”gold and green forests” about how much better we will live and consume in the future if only we vote for her or his party. Someone who hopes to make a career can’t tell the voters that we must also take some painful steps and give up something to save the planet.

Democracies to a dangerous extent now rests on pulling the wool over the citizens’ eyes when it comes to the state of the world. In addition, democracy is a very slow decision-making process in a world where complex solutions are urgently needed sooner rather than too late.

8. Public relation replaces knowledge
Politics increasingly is seen as a game, as pragmatic navigation and positioning. Reforms and laws are to be sold to the citizens as if they were commodities. For that you need short, punchy soundbites, spin doctors and marketing campaigns – public dialogues and debates throughout society too slow (and could lead to change in what decision-makers have already decided).

Media developments go in the direction of shorter and shorter statements, nothing can last more than 30 seconds, concentration span reduced towards zero – give me the essence in 30 seconds or we lose our viewers! A vicious circle.  This leads to positioning: As a politician you don’t have to know much about the complexities of, say, Syria or Ukraine, it is more important to be able take sides – good guys versus bad guys.

And, so, instead of enlightening dialogues (exploring issues) and debates (let various standpoints meet and be backed up by arguments), we get the typical sports match-like televised confrontations: Our policies are better than yours! And who is then most eloquent or nicely dressed, ”wins” the confidence. And the votes.

Thanks to modern communication and media demands the time for knowledge-based political decision-making has been reduced enormously during the last 20-30 years. This mostly probably impacts negatively on the quality of most decisions.

9. Politics as a calling versus a career mechanism
Once politics had a focus on aiming to promote a particular future development and ideological differences were clear. Today’ politics has become more of a profession, a career option; you take some years in politics and the go on to corporate business board rooms or whatever that may give you fame and funds.

You don’t become a politician because you are driven by a burning passion – as my students mentioned above have taught me. Politics, rather, attracts people without such passion – except perhaps for personal privileges, limousine and frequent 1st class travels paid by their tax payers.  This means that politics no longer attracts the visionary leader type, the charismatic personality types who can inspire the young, those for whom politics should be made.

With the standard exception stated – and there are individual exceptions to the above – most politicians lack humour (at least on-stage), personality and vision – combining into making democratic activities and debates utterly boring most of the time.

10. Finally, democracy should be about creating choice, not just voting.
Most people seem to believe that democracy is about voting for some policy, some laws or voting yes or no to some alternatives set up by the political elites (also called referendum).  But fundamentally, democracy’s very idea is not to vote on an issue set up in advance; democracy is to contribute to establishing the agenda in the first place. Example: Yes or no for a country to EU. But that is not democracy! Democracy is to develop a broader spectrum of which, say, the EU is only one option/alternative among a series. Genuine democracy is about setting agendas. It’s not about voting yes or no to somebody else’s more or less cunning agenda.

You could, perhaps, summarise it all by saying that democracy is no longer lived, it is being performed. It’s become a ritual without much ethos.

Citizens’ sense of not getting through to decision-makers

The sentiments expressed by an increasing proportion of citizens in the Western world is that it is extremely difficult to “get through” to the people who make decisions on the top. Compared with a few decades ago, these top decision-makers also seem to feel it less important to be in direct dialogue with the constituencies. Some no longer responds to email (or have gate keepers) or even snail mails, quite a few do not respond to critics of their policies in the media. 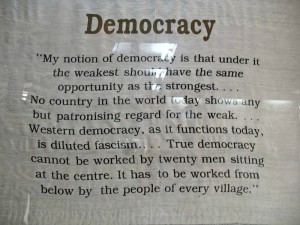 In one of his last interviews, French existentialist philosopher Jean-Paul Sartre (1905-1980) said that every time you vote, you give away power. That statement points to the essential, classical distinction between representative democracy and direct democracy. In the first you delegate to someone else who has convinced/seduced you, to take care of your interests.

We know this generally leads to false promise-making and considerable disappointment with the whole idea of politics. In the second, citizens take issues in their own hands – which of course has other disadvantages and encompasses a whole series of other problems. But without a vibrant citizenship, no demoracy is possible.

In summary, while democracy perhaps remains the least bad system, we should take care not to equate that statement with democracy being good enough.

It is no test of its quality that Western democracy is – ceteris paribus – better than authoritarian regimes or outright dictatorship.

Complacency in this matters could easily lead us towards whatever we associate with the opposite of democracy in years to come. Was the EU Parliamentary elections an indicator of just that at a deeper level?

Since the above discussion is very critical, the next article will invite the reader to a dialogue about some possible things that could be done to regain the basics of democracy and make it better for the future.