Greenpeace Blocks Two Major Oil Rigs to ‘Save the Arctic’

In the early hours of Tuesday [27 May 2014] morning, Greenpeace activists from 12 countries blocked two separate oil rigs destined for offshore drilling in the Arctic Ocean. 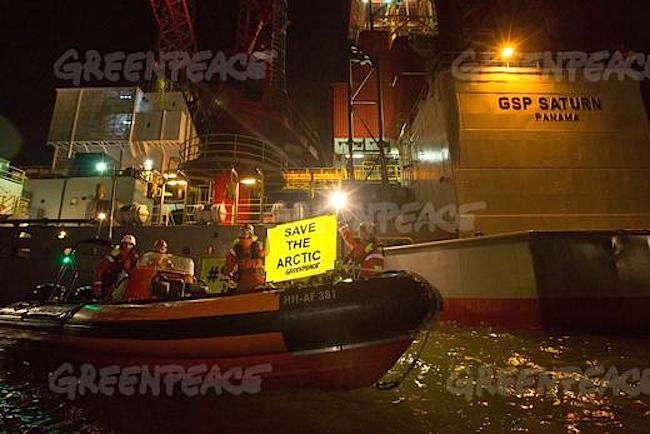 “The Arctic matters to us all, and protecting it demands a truly global response,” said Ben Ayliffe, a Greenpeace International campaigner. “We cannot let a reckless club of international oil companies hunt for the last drops as the ice melts away.”

In the Dutch port of IJmuiden, a group of 30 activists from Belgium, Germany, Austria, Italy and the Netherlands scaled and occupied the GSP Saturn, an oil rig contracted by Gazprom, Russia’s state-owned energy company, where they unfurled a banner reading, “Save the Arctic.” After five hours, officials removed and detained the activists.

In the Norwegian Arctic, a group of 15 Greenpeace activists from Norway, Finland, Sweden, Germany, Denmark, Fiji, UK and the Philippines occupied the Transocean Spitsbergen, an oil rig contracted by Norway’s state owned company, Statoil, as it prepares to drill the world’s northernmost well in the Barents Sea.

“Shell has already shown just how difficult it is to work in the U.S. Arctic, where extreme cold and remote conditions led to a series of embarrassing failures,” said Ayliffe. “Over five million people are now telling these companies that Arctic drilling isn’t worth the risk, either to the environment or their own reputation.”

Greenpeace is calling for a ban on offshore oil drilling and unsustainable industrial fishing in the Arctic, as well as a protected sanctuary around the North Pole. Last September, a Greenpeace protest against Arctic drilling at a Gazprom oil platform in the Pechora Sea was apprehended by Russian forces who arrested and imprisoned the 30 participating activists. Dubbed the “Arctic 30,” the group’s action led to an international outcry and a renewed focus on oil development in the Arctic, attracting the support of more than five million people, including 11 Nobel peace prize winners, Sir Paul McCartney and Archbishop Desmond Tutu.

“The websites of Shell, Gazprom or Statoil might look different but their willingness to ignore the reality of oil spills and the human cost of climate change is exactly the same,” Ayliffe concluded.

Why Are Arctic Bird Populations Declining?