I Wasn’t Invited to Bilderberg 2014 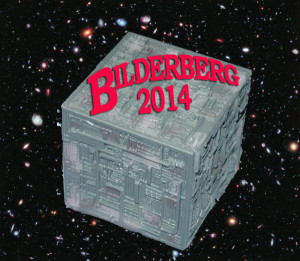 The Press is suffering from conspiracy theory fatigue. Sixty years on, the economic para-state continues to meet, now at the Marriott Hotel in Copenhagen, for its annual jamboree, gathering bankers, industrial and business moguls, their press lapdogs and the politicians who can deliver the profits for the arms manufacturers by starting wars masquerading as humanitarian interventions.

Repeating they are not “secretive” but rather “discreet”, every year the display for the benefit of the press gets more stage managed. Better than hiding is to show what they would like us to see. Like Sir John Kerr, Baron Kerr of Kinlochard, current vice-chairman of Scottish Power and central Bilderberg insider giving George Osborne, UK chancellor of the exchequer (the man supposedly in charge of the UK economy, that is) a 25 minutes lecture during which the latter barely opened his mouth just towards the end (The Guardian). Another picture also from the Guardian shows Christine Lagarde, head of the IMF, “discussing fiscal policy with the economist Kevin Warsh, who’s on the board of logistics giant UPS…and Paul Achleitner, the chairman of Deutsche Bank and board member of Bayer pharmaceuticals. He’s at Bilderberg to make sure that whatever Lagarde does at the IMF, it’s for the best. The best for Deutsche Bank and Bayer pharmaceuticals.”

Like during the cold war, when spying was absolutely necessary to ensure both sides had the information about their capability for mutually assured destruction (MAD) – what they hoped would be the real deterrent, rather than the weapons per se – Bilderberg 2014 is giving the world a loud and clear message: “We are in charge, resistance is futile, you have been assimilated!”

This year they are discussing quite critical issues. No doubt assessing and making decisions about Ukraine and Syria, perhaps not so much about “democracy” but rather about war profits, and The Transatlantic and Transpacific “free” trade zones being promoted at present by the mainly but not exclusively American based international financial system in order to tie in knots any government that attempts to defy multinational companies’ right to increasing their gains ad infinitum. The contents of these proposed trade agreements and their drive to lower environmental and health and safety standards, as well as more privatisation of health, education, housing, more austerity, more deregulation, leading of course to more tax havens, have been seen as a disaster for the general population. But Bilderbergers do not represent the general population, as they are wholly unelected (other than the politicians they extend special invitations to, so that they can be told what to do). China? The BRICS? Edward Snowden? They cannot be off the menu.

There is absolutely no need to speculate, the consequences of what is being discussed in these meetings are visibly clear: economic, physical, psychological and moral violence.

The only mystery, at least to me, is whether some, or many, of those gathered realise that the sensibility of the epoch is changing, that new waves of fresh thinking and feeling are happening away from the centres of power, that it all may look the same, business as usual, but they must know that this soulless world they have created will continue to experience crashes, each one of them opening more eyes to other possibilities, to a nonviolent world of compassion and solidarity, where life has meaning.

Silvia Swinden – Author of From Monkey Sapiens to Homo Intentional: The Phenomenology of the Nonviolent Revolution – Adonis & Abbey, London 2006.