Nicolás Cruz Tineo is an economist and director of the Dominican Republic-based Institute for the Development of Associative Economics (IDEAC by its Spanish acronym). IDEAC provides technical support to encourage solidarity economies. Cruz also serves as the executive secretary of the Network of Solidarity Economy Organizations (REDESOL). 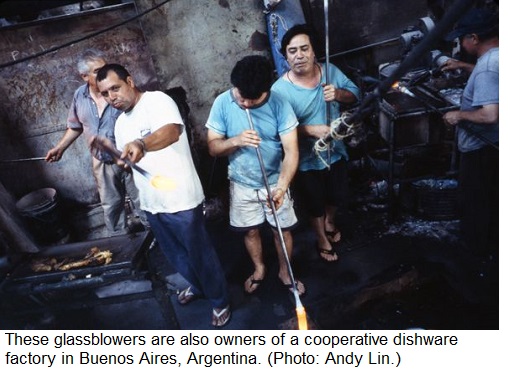 At the first World Social Forum at the end of the 1990’s, participants started looking for alternatives. There are a lot of authors who started to theorize about different forms of economies. They started to rescue the idea of solidarity economy, based on the experience of cooperatives, indigenous practices, practices from different parts of the world and different economies.

This came to be called the solidarity economy, basically a concept rescued by Chilean sociologist Luis Razeto Migliaro. It refers to different economic practices in which monies and profits are at the service of the common good. They are practices based in the articulation of collaborative and cooperative process among people, and where the center of the actions is the well-being of people.

Solidarity economy goes far beyond a simple practice. It’s a science that is taking shape and that is based, to a certain point, on the contributions of Marxism and contributions about the labor economy developed by Marxists. For me, I add five elements. First is self-management: a way to democratize the management of the economy. Second is gender: the participation of women through employment and recognition of domestic work as a contribution to the economy. Third is fair trade at an international level, a movement which shows the market is false. Fourth is food sovereignty, based on the rights of people to produce and to consume what they produce. Fifth is ecological economywhich can be changed to savethe biospherewhich is the entire systemof life, the social, political and natural processes that comprise life on our planet. Ecological economy is also an indigenous concept,an expression of how the relationship among humans and between nature and life can be harmonized,because solidarity economies look at the preservation of life. I’m not just talking about human life, but of all life, of Earth, the Cosmos. It is based on a state of interdependent coexistence with people. It recognizes that our happiness is based on that spirit; not in consumption, not in competing and showing that I am better or bigger than you, but simply: I give you, you give me, we share, and from that blooms a new form of culture. I hope that a new cycle will begin where human spirit and love shall be the dominant forces on the planet.

There are solidarity economy authors who speak of ‘amorizacion’or ‘loveization,’that is, recovering love among humans. There’s a whole debate that historically capitalism was based on the philosophy that man is inherently evil and selfish. Economists like David Ricardo and Adam Smith used as a basis the idea that economics exploit human selfishness, thus creating a favorable atmosphere for free competition. The solidarity economists propose the opposite. They say, humans have historically tended towards socialization, getting together, collaborating. If they had not, from the times of primitive humans even, we would not still be life form on this planet because the only way for us to survive as a species is by collaborating and taking care of one another. The competitive spirit, the spirit of struggle, to wage war… those were encouraged by capitalist ideas that nowadays neoliberals have exacerbated to an extreme. Competitiveness, entrepreneurship, and consumption are the dominant ideologies nowadays.

Solidarity economies suggest something different: that we are human, we cooperate with one another, we love, we struggle for the love of humanity, and that the future of our planet, our life, is based on our having a culture of brotherhood, sisterhood, collaboration, cooperation. Thus, it should be an economy of love.

That is the crux, the nucleus of difference between solidarity economy and capitalist economy. In the former, there is no exploitation of nature, life nor human. That is to say, human labor is a source of creation of goods for the common good, not for anyone to appropriate.

Examples on a local level include so-called eco-villages, small communities that have been createdby people who want to exist completely outside of the formal system. They create their structures and ways of living together in community. In terms of production, there are co-ops, systems of international cooperation.

Then, there are many expressions of solidarity economy on an international level. For example, there is the social bank in Italy, the solidarity bank, ethical bank, responsible consumer movement. In all countries, there are people who don’t consume products that are not eco-friendly, or products that come from factories who exploit child labor, etc.

That is why the anti-capitalist debate and struggle nowadays are not frontal struggles, but a guerilla war directed at having poor communities be able to keep the wealth that is created within that community. The war against capital is fought by retaining that wealth created by the workers in the hands of the workers. There are a thousand ways to do this. [One example] is a rice producer who will sell to an intermediary who buys for the lowest price possible. In a conventional market, the producer keeps 30%, while the market takes 70%. If that rice producer partners with 10 or 12 other producers, they can create a co-op, and that co-op will play the role of the intermediary and business[person]. The co-op pays a fairer pricethat is higher for the producer, lower for the consumer. The workers can keep a larger amount of wealth in their hands, thus the capitalist [intermediary and businessperson] does not become richer, keeping the wealth in fewer hands. Distributing the wealth limits the possibility ofmaking profit, and in that sense you are waging a war on [capitalism]. It is not using armed struggle, but rather accumulating economic power, little by little, so that the capitalists’ economic power is stopped. I am presenting it quite dramatically, but it is basically that.

We can’t work just in economic terms; we also have to work in cultural terms. We have to penetrate universities’ schools of economics, community anthropology, sociology, and philosophy. We have to work in sciences, culture, and knowledge. That’s what Evo Morales is doing [in Bolivia], what Hugo Chavez did in Venezuela, what Correa is doing [in Ecuador], Kirchner in Argentina: democratizing the media and giving space to popular communication, popular TV, popular broadcasters.

Conventional capitalist economy always seeks the reproduction of capital as the key element and when talking about the common good, they trick us. The IMF and the Inter-American Development Bank, as well as large companies like McDonald’s, Nestlé and Monsanto all talk about sustainability, human development, the ‘green economy.’ The UN is the official spokesperson of this new language, which is simply to make a legal world framework so thatcapital may exploit all the remaining natural areas that are left untouched. There’s a whole mix of policies and actions that camouflage the way they exploit the planet and people.

To limit those possibilities, we want to advance very clear alternative proposals at the international level. This has become a global movement, with its largest network called the Inter-continental Network for the Promotion of Social and Solidarity Economy, or RIPESS. It includes national and regional networks in Latin America, the Caribbean, Asia, Europe, Africa, and North America. We have the Mont Blanc Meetings, an international association that’s an alternative forum to the [World Economic Forum] in Davos. There are constantly international meetings with proposal, publications, and programs to counter what is happening.

[As Eduardo] Galeano, the Uruguayan writer, said: “Utopia lies at the horizon. When I draw nearer by two steps, it retreats two steps. If I proceed ten steps forward, it swiftly slips ten steps ahead. No matter how far I go, I can never reach it. What, then, is the purpose of utopia? It is to cause us to advance.”