What’s Really at Stake in the Sydney University BDS Affair? 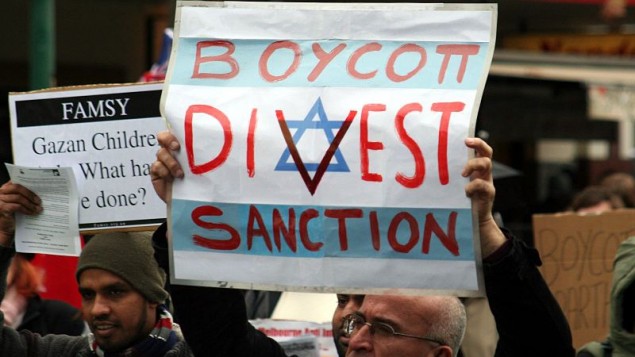 Later today [3 Jun 2014], the Australian National Tertiary Education Union will vote on a call to delay a decision on support for BDS [Boycott, Divestment & Sanctions against Israel].

“The reason why academic politics are so bitter is because so little is at stake.” The remark is attributed to Henry Kissinger, once he had exchanged the US State Department for the hallowed corridors of Harvard; and it haunts debates among university folk, who can often seem wary of candid disagreement among themselves, as potentially “divisive”.

That word has been much in evidence at the University of Sydney, as members of the National Tertiary Education Union have been asked to consider whether their branch should endorse the Palestinian call for Boycott, Divestment and Sanctions on Israel.

But it is misplaced. Those of us — in the newly formed Sydney Staff for BDS group — who wish to promote this discussion are committed trade unionists. If the vote, at a meeting called for this week, goes against us, we will not feel ‘divided’ from our colleagues. There will be no tearing-up of membership cards.

We are asking for a modest amount of time and resources to be given over to a discussion, allowing members to think carefully about the issues involved, over a number of months, and hear from people with a range of views. That process need not be “divisive”. We can talk about this without descending into bitterness.

Then, is there really so little at stake? The union has circulated an anti-BDS motion from its General Secretary, Grahame McCulloch, in which he reminds members of a policy the NTEU adopted in 2011. It “recognis[es],” among other things, that “any solution must involve direct negotiations between Israel and Palestinian authorities to create a viable Palestinian state”.

But the recent failed talks, brokered by Kissinger’s successor, John Kerry, prove that any such negotiations are doomed for as long as Israel enjoys virtual impunity for its policies of militarism and lawlessness.

As the statement by chief Palestinian negotiator Saeb Erekat declared:

“Israel refuses to negotiate sincerely because, as long as the status quo is so beneficial to it, Israel has no interest in a solution. Without firm signals from the international community, Netanyahu’s occupation and colonization policies are incentivized”.

Those signals are unlikely to come from governments, at least without pressure from below. That makes BDS a central plank in a strategy to achieve peace with justice, enabling Palestinians to enjoy essential rights and freedoms.

That is why support for BDS has been growing worldwide since 2011, when the NTEU policy was adopted — a time frame that spans the efforts of the Obama Administration to revive the “peace process”, under Hillary Clinton, then Kerry.

The facts have changed, and we should now — three years on — have the chance to change our minds.

Nahum Barnea in Y-Net News presents an interview with US officials, who spoke on the record but on condition of anonymity about the reasons for the talks’ failure and the prospects for peace.

“People in Israel shouldn’t ignore the bitter truth,” he was told. “The primary sabotage came from the settlements.”

And they should “be smart” and realise that “in the 21st century, the world will not keep tolerating the Israeli occupation”.

This is realised, of course, by many in Israel, and the responses include “lawfare”: using the courts of other countries to close down political action intended to signal a refusal to tolerate the occupation, such as BDS.

Ronald Lauder, President of the World Jewish Congress, told the Jerusalem Post:  “The way to defeat boycotts is legally, and we looked at this and we realised that many countries have laws against boycotts, and these lawyers came up with very interesting solutions, and this is a way to defeat them.”

The current case in the Federal Court, in which I am the subject of a claim by five applicants led by Israeli law centre Shurat HaDin, represents an attempt to apply such a “solution”. Andrew Hamilton, who until this month was its legal representative (and who is himself another of the applicants) has declared the aim to be outlawing BDS in Australia, and to contribute, by setting a precedent, to a “permanent fix… [of] global impact”.

Another response, besides legal action, is so-called “public diplomacy”, the subject of an extensive research report, commissioned by the Israeli Ministry of Foreign Affairs from the Neaman Institute at Technion University, on how to sanitise Israel’s image abroad.

Among the proposed measures in the Neaman Report is to cosy up to “beneficial clients” in other countries including “educational organisations”. This means the institutional links between the University of Sydney and Israeli universities, including Technion and also the Hebrew University of Jerusalem, are tantamount to complicity in the violation of Palestinian rights and freedoms.

“Complicity” is a big word, and I should immediately add — there is no claim of conspiracy. Among the most committed trade unionists in the NTEU branch are many accomplished social scientists, who will be well aware, I’m sure, of some of the most influential ideas in their trade over the last few decades, which account for exertions of political agency by going beyond intentionality.

Scholarly debates were anticipated, in that sense, by President Eisenhower, who spoke about the power of the military-industrial complex. The combination of a large military and armaments industry was attaining “unwarranted influence”, he declared in a valedictory address as he left office in 1961, “whether sought or unsought”.

Among the scholars who’ve elaborated on that theme is French philosopher Michel Foucault, who told us “there is no form of power that is exercised without a set of aims and objectives,” but cautioned against seeking “the headquarters that presides over its rationality”. Generative force, which makes things happen, can originate not in individual behaviour but in the systems and structures the individuals inhabit.

Those structures can be ideological as well as institutional. And power can prevent as well as enable. The word “divisive” signals a set of assumptions, embedded within the power structures that sustain the occupation, which can shut down debate — if we let it.

Under discussion at the NTEU this week will be a motion to delay making a final decision on whether to support the boycott call, at least until the outcome of my court case is known. We need time to think, and we should take it.