African Leaders Vote to Give Themselves Immunity from War Crimes 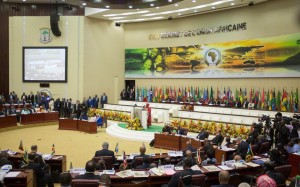 July 1, 2014 – African leaders gathered for a continent-wide summit voted to give themselves and their allies immunity from prosecution for war crimes, crimes against humanity and genocide at a new African Court of Justice and Human Rights.

The decision comes as the continent confronts human-rights violations and has two sitting presidents and one ousted president facing charges at the International Criminal Court.

Amnesty International called it “a backward step in the fight against impunity and a betrayal of victims of serious violations of human rights.”

“At a time when the African continent is struggling to ensure that there is accountability for serious human-rights violations and abuses, it is impossible to justify this decision which undermines the integrity of the African Court of Justice and Human Rights, even before it becomes operational,” said Amnesty’s Netsanet Belay.

The decision came Friday at an African Union summit vote in Equatorial Guinea from which journalists were excluded, Amnesty International said. News of the vote was imparted obliquely in a statement Monday night about the summit outcomes. A paragraph listing legal instruments agreed to at the meeting included the “Protocol on Amendments to the Protocol on the Statute of the African Court of Justice and Human Rights.”

Forty-two African and international civil society and rights groups had objected to the amendment, noting in an open letter before the summit that the impunity violates international and domestic laws as well as the constitution of the African Union.

Simon Allison of the South African-based Institute for Security Studies wrote in an op-ed piece before the vote that “there are enough compromised African leaders who might stand to benefit from the immunity on offer.”

He noted that there is an argument to be made that guaranteed immunity for presidents and senior officials might actually encourage African states to engage more enthusiastically with the proposed new court, and to abide by its rulings.

“If Africa’s leaders aren’t worrying about their own fate, they won’t have anything to lose by cooperating,” he wrote.

And it might keep the court clear of the complicated political issues that have bogged down the International Criminal Court at The Hague.

That court has been accused of unfairly singling out African leaders. Earlier this year the African Union urged its members to “speak with one voice” to prevent criminal proceedings at ICC against sitting presidents. Only Botswana objected then, as it has now to the promised impunity at the African court.

The African Union has failed to persuade the U.N. Security Council to defer the trials of Kenya’s president and his deputy on charges of crimes against humanity for allegedly orchestrating postelection violence that killed more than 1,000 people in 2007. Both men deny the charges. The Africans also wanted the deferral of criminal proceedings against Sudan’s president, who has been charged with genocide in Darfur.