The Australian government continues to break the law with its actions against asylum seekers. 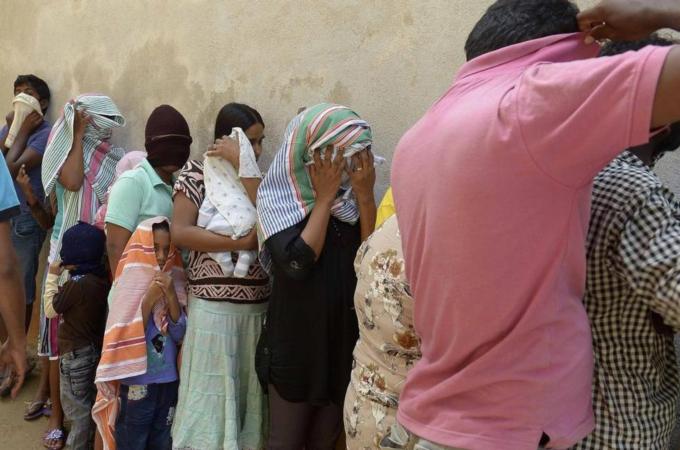 As Australia’s conservative federal government falls further in opinion polls, it is increasingly willing to eschew international refugee conventions to cling to the one thing that is winning it support – the illegal and inhumane treatment of asylum seekers.

While the Australian government’s treatment of child refugees and its refusal to release details of asylum seeker boat arrivals and block attempts by journalists to investigate detention facilities earn it little praise internationally, at home it is one of the few things winning the government any favour.

When asylum seekers on the offshore Manus Island detention centre were attacked during a series of riots in February, with 23-year-old Iranian Reza Barati killed inside the facility, there was a flood of criticism of government policy from domestic and international rights groups.

But a Lowy Institute poll taken earlier this year found the majority of Australians support offshore detention processing, despite Barati being killed, as the poll was being conducted. Equally, 71 percent supported government policy to turn boats back when safe to do so.

As the government and Prime Minister Tony Abbott’s popularity took a nosedive, due in part to a deeply unpopular federal budget, so things worsened for asylum seekers. The government secretly ordered a boat carrying 41 Sri Lankan asylum seekers be sent back to the island they fled before the Australian High Court intervened on July 7 and temporarily saved 153 Tamils from the same fate.

In Australia’s current political climate, the government takes asylum seeker children as young as two into custody and keeps their location secret for weeks, suicidal mothers held in offshore processing centres are accused by Abbott of “emotional blackmail” and religious leaders are arrested for peaceful protests supporting refugees’ lawful right to seek asylum, amid claims of torture of Manus Island detainees who gave statements to police about February’s outbreak of violence.

Asylum Seeker Resource Centre chief executive Kon Karapanagiotidis told me the 153 Tamil asylum seekers, including 37 children, were being held somewhere in the Indian Ocean on an Australian customs vessel. Australian aid agencies have not had contact with them since June 26. The government refuses to say where the 153 are.

“It is of grave concern that the 153 asylum seekers will continue to be held against their will at sea for this entire period, reportedly in locked, windowless rooms, most likely on a boat designed to carry just 120 passengers,” Karapanagiotidis explains.

Karapanagiotidis also says the coalition’s election campaign promise to “stop the boats” is one of the few the government has – ostensibly – kept.

“Their hardline approach to ‘protecting our borders’ and saving lives at sea by enforcing their ‘stop the boats’ mantra … is a hollow success. They may have vigilantly stopped boats reaching our shores, but … the fact that they are stooping to such morally and financially questionable depths to ‘stop the boats’ – along with the current case of the 153 Tamils before the High Court – shows that their approach to asylum seekers and refugees is simply not workable.”

The latest incident has drawn criticism from the United Nations. A statement from the refugee agency said the UNHCR was “deeply concerned” Australia returned asylum seekers to Sri Lanka after a brief, on-board screening.

“The principle of non-refoulement [the prohibition on return to threats to life or freedom] in the 1951 Refugee Convention and more broadly under customary international law is clear: it applies wherever an asylum-seeker is found and to whatever manner the expulsion or return is carried out, including during interception and other sea operations,” the statement said.

The government claimed in a High Court hearing it was acting in line with the country’s Migration Act, as the asylum seekers were picked up in Australia’s contiguous zone, a nautical buffer between a country’s territorial sea and economic zone.

However, barrister Claudio Bozzi said the government was now in a quandary: “Taking these boat people onto its customs patrol vessel brings them, under international law, into Australian territory. This is because, at international law, the vessel is an extension of the state whose flag it flies.”

Leading human rights barrister Julian Burnside goes further. Burnside, who was Senior Counsel in 2001 for a group of Afghans rescued by the Norwegian Tampa at the request of the Australian Government, who then left them to languish at sea for five days, said the detention of the 153 Tamils “looks for all the world like piracy“.

Abbott claims Sri Lanka is “at peace” and Tamils have nothing to fear in their homeland, despite multiple reports from rights groups and Australia’s British allies all recognising Tamils are very much at risk of persecution. Archbishop Desmond Tutu explicitly stated in a March report that: “[A]nyone remotely connected with the losing side in the civil war is being hunted down, tortured and raped, five years after the guns fell silent… It is imperative to pierce the skein of impunity that surrounds Sri Lanka – an island where the war is clearly not yet over.”

And it is not just members of the Tamil minority who suffer attacks on their human rights; other religious minorities, women, journalists and the LGBT community are all at risk.

“I do not think the resolution adequately recognised the significant progress taken by the Sri Lankan government to promote economic growth and its investment in infrastructure in areas formerly dominated by the [Liberation Tigers of Tamil Eelam] in the north and northeast of the country. We should recognise the brutality of the LTTE, a proscribed terrorist organisation, during the 30-year civil war from which the country is struggling to emerge.”

In the same manner in which Bishop places the blame for the current Israeli massacre in Gaza on Hamas, she lays the alleged atrocities of the Sri Lankan Government at the feet of the Tamil Tigers.

In the search for an ally in the Indian Ocean to help stop a handful of asylum seekers making for Australian shores – Australia gifted two patrol boats to Sri Lanka in November last year – Abbott and his government become complicit in Sri Lankan human rights violations by ignoring them and returning vulnerable people to the place from which they are seeking asylum.
_________________________

Fiona Broom is a freelance journalist. She previously reported on legal, political and multicultural issues for Australian newspapers.