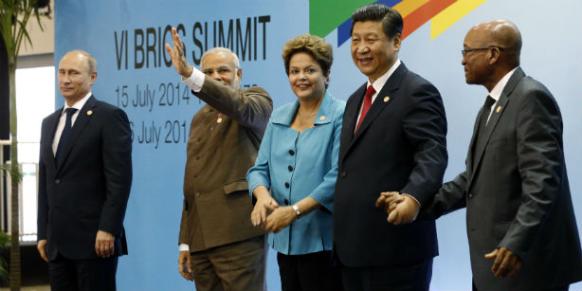 Leaders of the BRICS emerging market nations launched a $100 billion development bank and a currency reserve pool on Tuesday [15 Jul 2014] in their first concrete step toward reshaping the Western-dominated international financial system.

The bank aimed at funding infrastructure projects in developing nations will be based in Shanghai, and India will preside over its operations for the first five years, followed by Brazil and then Russia, leaders of the five-country group announced at a summit. They also set up a $100 billion currency reserves pool to help countries forestall short-term liquidity pressures. The long-awaited bank will be called the New Development Bank. It is the first major achievement of the BRICS countries — Brazil, Russia, India, China and South Africa — since they got together in 2009 to press for a bigger say in the global financial order created by Western powers after World War Two and centered on the International Monetary Fund and the World Bank.

The BRICS were prompted to seek coordinated action following an exodus of capital from emerging markets last year, triggered by the scaling back of US monetary stimulus. The new bank reflects the growing influence of the BRICS, which account for almost half the world’s population and about one-fifth of global economic output. The bank will begin with a subscribed capital of $50 billion divided equally between its five founders, with an initial total of $10 billion in cash put in over seven years and $40 billion in guarantees. It is scheduled to start lending in 2016 and be open to membership by other countries, but the capital share of the BRICS cannot drop below 55 percent. The contingency currency pool will be held in the reserves of each BRICS country and can be shifted to another member to cushion balance-of-payments difficulties. This initiative gathered momentum after the reverse in the flows of cheap dollars that fueled a boom in emerging markets for a decade.

“It will help contain the volatility faced by diverse economies as a result of the tapering of the United States’ policy of monetary expansion,” Brazilian President Dilma Rousseff said.

“It is a sign of the times, which demand reform of the IMF,” she told reporters at the close of the summit. China, holder of the world’s largest foreign exchange reserves, will contribute the bulk of the contingency currency pool, or $41 billion. Brazil, India and Russia will chip in $18 billion each and South Africa $5 billion. If a need arises, China will be eligible to ask for half of its contribution, South Africa for double and the remaining countries for the amount they put in. China’s official Xinhua news agency, citing unidentified sources at the Chinese Finance Ministry, said the new bank would give developing countries a greater say in the international financial order, a theme President Xi Jinping struck ahead of the summit. The new bank “will promote the global system of economic governance to develop in a just and fair direction,” the agency said.

Negotiations over the headquarters and first presidency lasted until the eleventh hour due to differences between India and China. The impasse reflected the trouble Brazil, Russia, India, China and South Africa have had in reconciling stark economic and political differences that made it hard for the group to turn rhetoric into concrete action.

“We pulled it off 10 minutes before the end of the game. We reached a balanced package that is satisfactory to all,” a Brazilian diplomat told Reuters. Negotiations to create the bank dragged on for more than two years as Brazil and India fought China’s attempts to get a bigger share in the lender than the others. In the end, Brazil and India prevailed in keeping equal equity at its launch, but fears linger that China, the world’s No. 2 economy, could try to assert greater influence over the bank to expand its political clout abroad. China, however, will not preside over the bank for two decades.

Facing efforts by leading Western nations to isolate Russia for annexing Crimea and stirring revolt in eastern Ukraine, the BRICS summit provided President Vladimir Putin with a welcome geopolitical platform to show he has friends elsewhere, economic powers seen as shaping the future of the world. The BRICS abstained from criticizing Russia over the crisis in Ukraine and called instead for restraint by all actors so the conflict can be resolved peacefully.