Deploying Drones to Get an Overview of Factory Farms

Will Potter, a Washington D.C.-based , recently raised $75,000 to buy the drones and other equipment to investigate animal agriculture in the U.S.

“I was primarily motivated by what’s happening outside of those closed doors, but is still invisible and hidden from the public spotlight,” he tells The Salt. “In particular, I was motivated by seeing these of farm pollution, of waste lagoons, of sprawling industrial operations.”

Potter has cast the project as a way to circumvent regulations in that outlaw footage and images gathered undercover by whistleblowers who work in concentrated animal feeding operations, or CAFOs. Dubbed “ag-gag” by critics, make it illegal for anyone to videotape or record surreptitiously on farms.

In farm country, the reaction to Potter’s scheme has been mixed.

“It’s unfortunate that the media and others see Mr. Potter and other detractors and activists as having more expertise than the folks with their boots on the ground every day, growing and raising our food,” she says. “It’s even more unfortunate that people contribute to campaigns like this on Kickstarter instead of investing in any of the other myriad of worthy causes — including working to end hunger.”

Others are warning Potter that the drones could be used for target practice.

“Those things better not be coming over during duck season because there are hunters out there that might look up and mistake that drone for a duck,” says Chuck Jolley, a meat industry veteran.

Jolley, based in Kansas City, Mo., has disparaged ag-gag laws and argues that farmers and ranchers should open their doors to anyone who wants to see their operations. Jolley’s not alone; , the animal scientist at Colorado State, for placing video cameras in slaughterhouses and livestreaming the production lines. 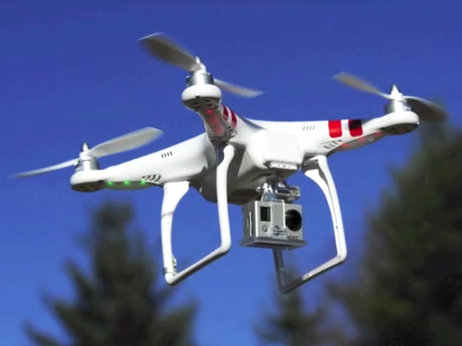 The drone in Potter’s promotional video on Kickstarter. “Now I’m looking at other models (and a second drone) because some people have threatened to shoot it down,” Potter says.
via Kickstarter

But many in the animal agriculture community oppose the recent investigations by activists, and support laws that give producers the power to sue them for trespassing, invasion of privacy or harassment. Commenters on Jolley’s recent for Drovers CattleNetwork called the animal rights activists “terrorists” and “zealots” who don’t understand agriculture and edit the videos selectively for maximum dramatic effect.

Could Potter be prosecuted for flying drones over farms? Clemens Kochinke, a Washington D.C.-based lawyer behind the blog, says the law is unclear about monitoring ag businesses. And it takes years to test the laws in court.

“Aside from the many federal issues involving the [Federal Aviation Administration] and the [Department of] Homeland Security, you have the state, county and municipal rules,” Kochinke says. “An overriding limitation on the restriction of drones may derive from the First Amendment where reporting in the public interest is concerned.”

In an interview, Potter told us he will focus on the states where anti-whistleblower laws are being debated. He pledges to share his findings in an e-book and a short documentary.

But Potter admits the drones he plans to deploy won’t be able to get the same, close-up footage of livestock operations that groups like Mercy for Animals and the Humane Society obtained through undercover investigations. Instead, he says, he’ll focus on showing the magnitude of the operations and the pollution they generate.

This is not the first time activists have deployed drones to investigate animal issues. In April 2013, PETA, the animal rights group, announced it would be flying drones to “” and “monitor those who are out in the woods with death on their minds.”

At the time, farm country and hunters went on defense, suggesting the PETA drones would be a “.” Ammoland.com, which publishes shooting sports news and advocacy, published a its readers could use for practice, complete with a PETA logo with its bunny.

Since then, PETA has begun selling its Air Angels Drones to the public for $329.99 each through its . So far, PETA has sold more than 60 of the aircraft; the suggested use is for watching wildlife and looking out for illegal hunting, says Lindsay Rajt, PETA’s associate director of campaigns. Using new technologies to advocate for animals is part of a “compassionate trend,” she adds.

Ingrid Newkirk, PETA’s president, says she’s supportive of other people using drones to gain information that may help prevent animal suffering. “If Will Potter uses drones legally to shine a spotlight on factory farming and slaughter practices, we’re all in favor of it,” she says.