Not in My Name, Netanyahu

As I write these words, my hands tremble from the unspeakable images and stories I’ve witnessed in Gaza. They tremble with worry that those young Israeli soldiers losing their lives, casualties in a war they did not create, will be among those families I know, and that their numbers will grow.

My hands also tremble because, during all this, Israel’s leader – Prime Minister Binyamin Netanyahu – has repeatedly claimed to represent me, and all Jews, as Israel continues its brutal assault on Gaza, an assault which, as history shows, will neither achieve its strategic goals nor reap anything but heartache.

No, he does not speak for me.

When Netanyahu said on CNN that Palestinians benefit from “telegenically dead” civilians killed by Israel, that images of carnage helped Hamas because journalists would then ask about Israel’s actions, he did not speak for me. 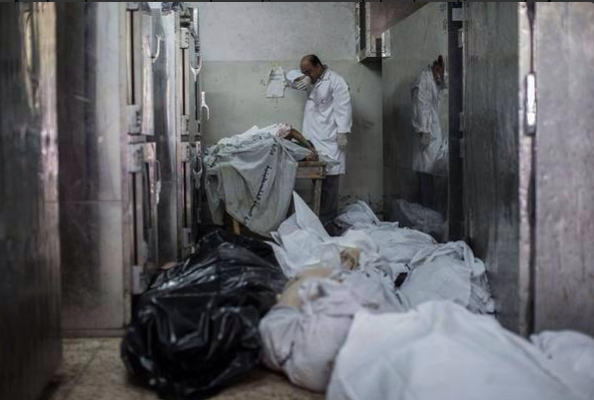 A doctor cries while standing among the bodies of dead children at Shifa Hospital’s overflowing morgue. [Note: journalists have captured countless disturbing images today, though I’ve chosen not to show them here.

When Netanyahu blames Palestinians for their own deaths, dismissing them as “human shields” – including the over 100 children who have been lost – rather than note Israel’s choice to obliterate homes in dense, urban areas when it’s known innocents will die, he does not speak for me.

When Netanyahu dehumanizes Palestinians by saying their society celebrates death, whereas my people, Jewish Israelis, only celebrate life – while sending soldiers to war after calling for vengeance – he does not speak for me.

When a top minister in Netanyahu’s cabinet says Palestinians are committing “self-genocide,” admitting something atrocious is indeed occurring in Gaza, but blaming the victims for their plight, his government does not speak for me.

When the Deputy Speaker of the Knesset, in Netanyahu’s ruling party, says without reproach that Israel should expel all Palestinians in Gaza and populate it with Jews, his government does not speak for me.

When far-right extremists, incited in part by their leaders’ hateful rhetoric, chant “Death to Arabs” and violently attack anti-war protesters – as is now happening on a daily basis – they do not represent me.

More than anything, though, Netanyahu does not speak for me because, unlike him, I oppose this war.

I oppose it for many of the same reasons cited by Dahlia Scheindlin, an Israeli journalist whose latest piece, which Jeffery Goldberg has called the “best-argued Israeli-written anti-war argument,” makes a compelling case for why the Gaza war is not just tragic, but a tragic mistake.

First, the disproportionate amount of force being used in dense, urban areas is resulting in shocking numbers of civilian casualties. To date, 470 Palestinians have been killed and over 3,000 injured, a staggering 80 percent of which are civilians, as estimated by the U.N.

Second, history has shown that this war will not achieve Israel’s stated, strategic goals of achieving quiet on the border and a deescalation. The opposite has happened, in fact, the last two times Israel has done this to Gaza (in 2009 and 2012). And during all this time, Israel has imposed a blockade on Gaza that has collectively punished and virtually imprisoned nearly two-million people. Continuously bombing and impoverishing a people does not lead to quiet. It never has. This war is not only brutal and tragic, it’s also pointless and even counterproductive.

Third, this war has greatly harmed the already-comatose two-state solution. Not only because it is undermining the Hamas-PA agreement which sidelined Hamas from government in the lead up to elections. It’s harming the prospects for peace because of the ongoing national trauma Israel is inflicting upon Palestinians which will reverberate for years. On that, Scheindlin writes:

In the long term, I shudder to think about the souls of people who lost two, three, or 18 family members to Israeli bombs. The sobbing father who begged his child to wake up because he had brought new toys; the woman who told her sister in England to stay away and live, so that at least one of the family members would survive. I see what national trauma has done to the Jewish people more than 60 years following their darkest moments. The manifestations of Palestinian suffering in future generations will be terrible.

Israel is not making itself safe by its actions. Instead, it is tilling the ground for further violence, for further upheaval, and for further threats to its security, as history has shown.

Like Scheindlin, I was asked by a friend, who happened to have his children over for a playdate yesterday, the following question, “What do you want Israel to do today, right now, when Hamas is firing rockets?”

My answer is her answer, an admittedly unpopular one:

There is no such thing as today devoid of yesterday and tomorrow; it is a fiction. The measures of the last ten days grow directly out of the measures in recent years. They will have devastating consequences in years to come. My criticism of this war is not “I told you so,” because some of us have warned for years that the status quo is illusory. Opposition to this war means finding a different response to predictable situations, so that there won’t be a next time.

I’m not going to offer a full array of what those different responses should be – that’s not my job nor within the scope of this piece. (Though embracing the unity deal and backing off unilateral agreements would be a good start.) I will say that Netanyahu’s response, the ground, air and sea invasion of an impoverished, urban enclave for the third time in five yeas, is a response I oppose.

Netanyahu does not represent the Jewish people.

And he certainly doesn’t represent me.

David Harris-Gershon is author of the memoir What Do You Buy the Children of the Terrorist Who Tried to Kill Your Wife?, published recently by Oneworld Publications.

One Response to “Not in My Name, Netanyahu”