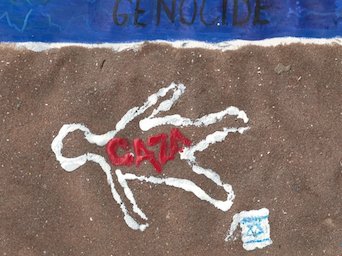 The IDF launched a vast ground operation in Gaza last night [17 Jul 2014]. Until now, Israel has failed to articulate its military objectives. No one in Israel is willing to commit to a definition of what a victory would look like. I am afraid that the military objective is obvious: saving Netanyahu’s political career.

Prime Minister Netanyahu and his defense minister Moshe Ya’alon have no other options. The two have tried to avoid a ground operation. Like most IDF leaders, Netanyahu and Ya’alon know that the Israeli army lacks the capability to counter Gaza’s ballistic defiance. Israel lost its power of deterrence a while ago. Instead, it developed impressive technology to deal with a ballistic threat. The Israeli Iron Dome anti-missile system performed exceptionally well, however, strategically, it proved counter effective. It liberated Hamas and other organisations in Gaza to unleash their rockets arsenal against Israeli cities, putting Israel on the defence while maintaining an ethical position since no one was getting hurt.

From a military perspective, this exposes a unique shift. The Hamas and IDF have swapped military doctrines. While in the past, Israel and the IDF were associated with the offensive doctrine philosophy – the belief that “attack is the best form of defence.”  Now the Hamas and other Palestinian freedom fighters are calling the shots and seeking engagement.

Both Netanyahu and Ya’alon are special-forces veterans. They have an excellent understanding of the military situation and they have been witness to the persistent resilient spirit in Gaza. They also realise that considering the growing isolation of the Jewish State, Israel’s options are limited.  PM Netanyahu and Minister Ya’alon know that a ground operation is not going to stop the missiles unless the entire Gaza strip is dug out. Israel doesn’t posses the military might to engage in such an operation nor does it enjoy the diplomatic ability to sustain such an extended assault.

For days PM Netanyahu has been pushed by hardliners within his cabinet. He has to show some commitment to the hawkish ideology he has advocated for years. The Israelis need revenge. After all, they have been humiliated by Palestinian resistance for days. They need something to cheer them up and Netanyahu knows what it is. The footage of Israeli soldiers marching into other people’s territory is a collective ecstatic moment in the Jewish State. A reminder that the atmosphere usually changes once Israeli soldiers are sent back home in coffins. But that happens later.