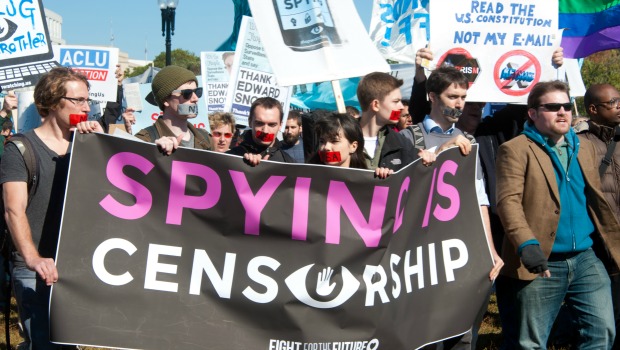 U.S. government surveillance programs are scaring away sources, making journalists feel like criminals and spies, and impacting the public’s access to quality news reporting, according to a new report released today [28 Jul 2014].

The 130-page With Liberty to Monitor All report by Human Rights Watch and the American Civil Liberties Union was based on 92 interviews with journalists, lawyers, and former and current U.S. government officials, many of whom spoke on the condition of anonymity.

Within the context of recent revelations of widespread surveillance by US authorities, including by former NSA contractor Edward Snowden, the report seeks to document how government spying has affected not just the work of journalists and lawyers, but also the subsequent impact on the public’s access to information.

While far from scientific, the report’s recurring theme is one of growing difficulty for journalists trying to cultivate and protect sources, and develop stories that involve sensitive or controversial government issues. Of the 46 journalists interviewed, many spoke of the time-consuming and arduous measures they have had to go to in recent times to ensure their work and their sources were not compromised – interestingly, much of it involved a delicate balance between using special technology, such as encryption, and abandoning technology altogether.

“Journalists told us that officials are substantially less willing to be in contact with the press, even with regard to unclassified matters or personal opinions, than they were even a few years ago,” the report said.

“In turn, journalists increasingly feel the need to adopt elaborate steps to protect sources and information, and eliminate any digital trail of their investigations—from using high-end encryption, to resorting to burner phones [discarded after a short period of time], to abandoning all online communication and trying exclusively to meet sources in person.”

The journalists also said the additional security measures were not only a burden that made reporting take longer, but also sometimes threatened to scare sources away.

“In many instances, for encryption to work, both the journalist and the source must have some facility with the same encryption tool. Some journalists expressed doubts about their own ability to master encryption and related technologies,” the report said.

“Others noted that many would-be sources lack the technical savvy to approach journalists safely, and even that using encrypted methods of communication with typical sources—as opposed to sources who already prefer to use encryption—might ‘spook’ them.”

“They’re going to feel like they’re doing something wrong,” said investigative journalist Jane Mayer of The New Yorker, in her interview for the report. “Your source has to be really committed [to bother with advanced security measures].”

Most journalists also expressed doubts about how effective their security measures were in the first place. Some did not believe encryption offered ironclad protection, and many indicated that journalists were simply not equipped or trained to adequately cover their tracks against the reach of authorities like the NSA or other intelligence services.

“I don’t want the government to force me to act like a spy. I’m not a spy; I’m a journalist,” Washington Post reporter Adam Goldman told the report’s authors. “What are we supposed to do? Use multiple burners? No email? Dead drops? I don’t want to do my job that way. You can’t be a journalist and do your job that way.”

Government officials interviewed countered journalists’ concerns that increased surveillance was making it more difficult to work or receive material from whistleblowers, pointing to stories like the NSA revelations from Edward Snowden as proof that a culture of leaking is alive and well.

But the report details a number of deterrents put in place by the government to discourage leaks, including over-classification of documents, limiting officials’ contact with media, and the “Insider Threat Program” which calls on government employees to be alert to colleagues who may be leaking state secrets.

It also points out that the risk of prosecution for whistleblowers has never been higher.

“It is not lost on us, or on our sources, that there have been eight criminal cases against sources [under the current administration] versus three before [under all previous administrations combined],” said Charlie Savage, a Pulitzer Prize-winning reporter for the New York Times.

Ultimately, the report argues that increased surveillance and government crackdown on officials speaking with and leaking to media will have a negative impact on “news coverage, public accountability, and the quality of democratic debate.”

“The US government has an obligation to defend national security, yet many of its surveillance practices go well beyond what may be justified as necessary and proportionate to that aim. Instead, these practices are undermining fundamental rights and risk changing the nature of US democracy itself,” the report said. “The net result is a less informed public.”

Hamish Boland-Rudder is ICIJ’s online editor. He spent two years running the breaking news website for The Canberra Times in Australia. He also spent time as a reporter writing for The Canberra Times, The Sydney Morning Herald, The Age (Melbourne), The Korea Herald, and various other publications.