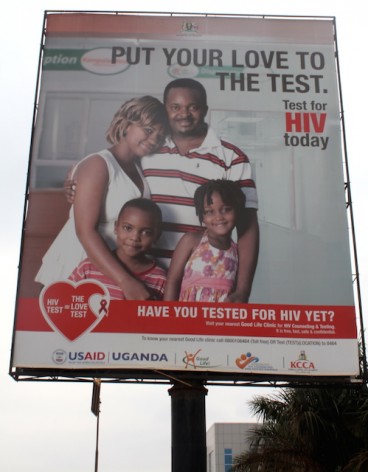 Uganda has been hailed as a success story in fighting HIV/AIDS, with prevalence rates dropping from 18 percent in 1992 to 6.4 percent in 2005. But activists fear a new HIV Bill will lead to lead to people shunning testing and treatment. Credit: Amy Fallon/IPS

21 Aug 2014 – HIV/AIDS activists are adamant Uganda will not achieve an “AIDS-free generation” now a “backwards” HIV/AIDS Bill criminalising the “wilful and intentional” transmission of the disease has been signed into law.

The act, they say, will lead to people shunning testing and treatment, but will particularly drive sex workers and gay men underground, and make women more vulnerable to domestic violence.

News that the controversial law, adopted unanimously by Parliament on May 13, and assented to by Uganda’s President Yoweri Museveni on Jul 31, broke on social media only this week on Aug. 19.

The bill also allows medical providers to disclose a patient’s HIV status to others without consent and prescribes mandatory testing for pregnant women, their partners, and victims of sexual offences.

Uganda has been hailed as a success story in fighting HIV/AIDS, with prevalence rates dropping from 18 percent in 1992 to 6.4 percent in 2005.

But Museveni went against earlier promises to the Joint United Nations Programme on HIV/AIDS (UNAIDS) executive director and campaigners that he wouldn’t back the punitive law.

“This is a populist act,” Kikonyongo Kivumbi of the Uganda Health and Science Press Association (UHSPA-Uganda) told IPS.

“He knows what he’s doing is not the right thing in addressing the general public health concerns in this country.”

Kivumbi pointed out that according to the 2014 UNAIDS Global Progress report, Uganda was now the third country in the world contributing to sustaining the pandemic.

Other campaigners are “heartbroken” and “outraged” after the president approved the HIV Prevention and Control Bill.

The news broke as CSOs were still waiting for an audience with Museveni over the controversial bill, which has been slammed by Uganda’s own AIDS Commission and the AIDS Control programme of the Ministry of Health (MoH).

“Some bad news from Uganda. Please pray for us,” Jacquelyne Alesi, director or programmes at Uganda Network of Young People Living with HIV & AIDS (UNYPA), said in an email to IPS.

The legislation prescribes a maximum 10 years in jail, a fine of about five million Ugandan shillings (1,980 dollars) or both for anyone who “willfully and intentionally transmitting HIV/AIDS to another person”.

Another provision of the law, drafted in 2008, provides for a fine or a maximum five years in jail for those convicted of “attempted transmission”.

According to the 2011 Uganda AIDS Indicator Survey, overall HIV prevalence is higher among women (8.3 percent) than among men (6.1 percent).

“So if she has tested positive and perhaps the husband becomes aware of it…he might treat this as a very negative result as well and she can be attacked.”

Amoding added, “it even brings about a very huge burden in terms of women inheriting property, because some people still think HIV is a death sentence.”

“So if I say ‘I want to have my husband’s property for the children’, people are going to say ‘you’ll die tomorrow, you’re HIV positive.’”

Most LGBT people with HIV/AIDS already “die silently” and many were no longer going for services in the after the passing of the Anti-Homosexual Act, Bernard Ssembatya, from Vinacef Uganda, a sexual health and reproductive NGO focusing on HIV, told IPS. The anti-gay law was, however, declared “null and void” by the constitutional court on a legality earlier this month.

“Some of them are wary of going to health services, some health providers are also scared of delivering services,” Ssembatya said.

There will be “an increase in deaths from HIV, more infections” as a result of the HIV/AIDS law, he warned.

According to AIDS Free World, over 60 countries criminalise the transmission of HIV or the failure to disclose one’s HIV status to sex partners, or both. Global Commission on HIV and the Law members have highlighted Guinea, Senegal and Togo, which they say in recent years have revised existing, or adopted new laws which limit HIV transmission to exceptional cases of wilful transmission.

Guyana also rejected a criminalisation law. In the U.S, 34 states still have HIV specific criminal statutes, however, in May Iowa approved a law revising a HIV specific statute.

Kivumbi pointed out that criminalisation was an “agenda of the U.S. republican right”, who he accused of influencing political and public health appointments in Uganda.

“We need to tell U.S. republican extremists and evangelical Christians to leave managing the HIV pandemic to ourselves,” he said.

“Just because the U.S. gives us money it does not mean [they] can impose their extremist agenda on us.”

Uganda had deliberately chosen to “moralise the pandemic and response, emphasising abstinence at the expense of condom use and other scientifically proven interventions,” Kivumbi said.

“We have had cabinet ministers, parliamentarians and other people at senior government level saying that people who are HIV positive are morally bankrupt,” the activist said.

Kivumbi said there was an “element of politicking” on Museveni’s part in inking his signature on the bill. Uganda will be submitting a “concept note” to the Global Fund to Fight AIDS, Tuberculosis and Malaria on Oct. 15, and wanted to get access to a 90-million-dollar loan from the World Bank that was suspended, he said.

One clause of the HIV/AIDS Bill seeks to set up an AIDS Trust Fund managed by the MoH, with money coming from foreign governments and international agencies, among other means.

Ironically, that loan was put on hold in February, just days after the president approved the Anti-Homosexuality Act.

“I think that the president thought that by signing this law, which [sets up] the AIDS Trust Fund, the World Bank would give him money and the Global Fund would contribute,” said Kivumbi.

“Let the Global Fund and the World Bank not be fooled.

”This law tramples upon basic civil liberties and cannot be acceptable in a free and democratic society that Uganda aspires to be.”

Dianah Nanjeho, a communications consultant at Uganda Network on Law, Ethics and HIV/AIDS (UGANET), which works with a coalition of 40 organisations, told IPS the activists wanted the contentious clauses in the bill to be amended.

“The act in itself is a good act we don’t condemn it, we just want those one, two three things sorted out.”

She said the positive parts of the law were state obligations to provide care and treatment and the establishment of the AIDS Trust Fund.

Nanjeho said CSOs, who are still hoping to meet Museveni, hadn’t ruled out challenging the law in court, and would make a decision on this in the next few days.

“For now we are all weighing all options,” she said.

Edited by: Nalisha Adams.  The writer can be contacted on Twitter @amyfallon.