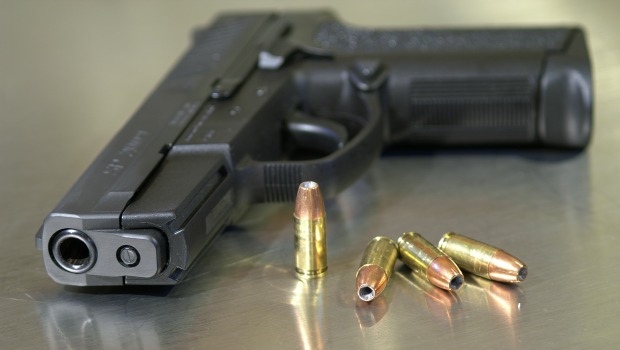 It all began with a hunch: that Germany’s oldest weapons manufacturer, Sig Sauer, may have bypassed German export law in order to deliver arms to foreign countries.

Whistleblowers had informed Süddeutsche Zeitung, a leading daily newspaper in Germany, and the German public television broadcaster NDR about a rumor in the Sig Sauer factory in Eckernförde, in the north of Germany. It was the start of a months-long investigation conducted with NDR-colleague Volkmar Kabisch – and supported by several ICIJ members around the world.

But the major breakthrough came from an unexpected source – a YouTube video, since deleted, titled “Policía Nacional Colombia.” The clip was a slideshow of images showing a black pistol, a German gun, greatly admired by the video’s maker, 30-year-old Colombian police officer Miguel S. The weapon was shown from all angles, including wide shots, and pictures from both sides. When you press pause at the right moment you can clearly read the inscription on the barrel: “Made in Germany.” The weapon is a Sig Sauer SP 2022, and should not have been in Colombia.

For the past 50 years Colombia has been a conflict zone, with ongoing battles between government forces, guerillas and paramilitary groups. For that very reason the German government has rules against German companies from selling or distributing weapons in Colombia, and other conflict zones. Punishment for violating the trade rule is severe, and includes export bans, fines and prison sentences of up to five years. But it’s usually hard for export inspectors and prosecutors to prove illegal arms shipments.

Except in this case – because the video of police officer Miguel S. also showed a serial number on the Sig Sauer pistol: SP0238567. Upon request, a Sig Sauer employee explained that the pistol was manufactured in Germany and had been sold from the German office to the U.S. branch of the company in September 2010. It was the evidence we were looking for.

In May 2014 we published our first report about questionable transfers of Sig Sauer weapons to Colombia. Within days another whistleblower contacted us and handed over internal documents from Sig Sauer Germany. The documents gave a rare insight into the how thousands of guns were allegedly making their way from the German parent company to places like Colombia, often via international subsidiaries, such as Sig Sauer USA, or agents, and often in contradiction of end-use certificates and shipping documents that said otherwise.

Records and messages shared with NDR and SZ appeared to show that employees within the German offices may have known about such arrangements, and may have been aware of the guns’ final destinations. One German employee even joked that they should “plant one on the kisser” of an overseas colleague because he had passed documents back to the German office “about which we [in Germany] should know nothing.”

After making the internal discussions public, police raided the Sig Sauer building in Eckernförde and the houses and bureaus of its owners. Furthermore the Federal Office of Economics and Export Control (BAFA for short) declared a temporary export ban for Sig Sauer.

Sig Sauer Germany told us that the pistol exports had been conducted “in accordance with the rules for the export of weapons in Germany and the U.S.” (“folgten den gesetzlichen Vorgaben für den Export von Waffen in Deutschland und den USA”). Sig Sauer USA has not responded to any requests for comment. No formal charges have been filed against the company.

It is not the first accusation made against Sig Sauer. German authorities raided Sig Sauer back in January, and seized several documents that allegedly revealed the sale of some 70 guns to Kazakhstan—another country in crisis – also through questionable international detours. And there are allegations that Colombia and Kazakhstan may only be the tip of the iceberg.

With the help of ICIJ-member Stefan Candea we also took a close look at a Romanian company, Romsauer, which was wound up in 2010, but provided more indications that the German company was using subsidiaries and representatives in other countries to get around weapons trade rules. The evidence included a “letter of authorization” from Romsauer naming an exclusive representative for the delivery of Sig Sauer weapons in Venezuela – another country where German weapons companies were not allowed to do business.

We also found links to questionable weapons deals in India, one of the world’s most lucrative arms markets due to the high level of demand from the Indian military. The German authorities disrupted the business, as documented in the U.S. diplomatic cables leaks from October 2008, published by Wikileaks. According to the cables, the U.S. State Department at the embassy in Delhi asked the Indian police to check an order from Sig Sauer USA. It was an order of 500 SP 2022 pistols. The German authorities had not approved the export, and at that time those pistols were almost exclusively made in Germany. To knowingly export them to India would be illegal.

We’ve already had assistance from ICIJ members in Romania, Colombia, Venezuela, and other countries, and as this investigation unfolds we will continue to collaborate with ICIJ members around the world to uncover more stories about the weapons trade.

ICIJ members Frederik Obermaier and Bastian Obermayer are award-winning reporters based in Germany.