Can You Smell What the Caliph Is Cooking?

Next week is the 13th anniversary of 9/11. And Washington is back to bombing… It’s Iraq, all over again – an eerie echo of the most tragic of all post-9/11 developments: Shock and Awe.

Osama bin Laden, now arguably at the bottom of the Arabian Sea (according to the official spin), used to personify the intolerant Wahhabi worldview run amok. Then his Wahhabism married Sayid Qutb’s Egyptian Islamism, personified by Dr. Ayman al-Zawahiri.

Qutb, killed by the Egyptian regime in the late 1960s, was the wayward prophet of a global jihad between Islam and the West. Yet his zealous sons – from Osama/al-Zawahiri to current Caliph Ibrahim of ISIS/IS [The Islamic State, formerly known as ISIS/ISIL] – went much further, their jihad targeting civilians and even Muslims.

Now Caliph Ibrahim has maneuvered Washington into renewed bombing in Iraq – and potentially bombing Syria. Obama does “Syraq”. And yet, more crucially, what if Obama is doing Al-Qaeda’s bidding?

This could all fit Osama’s carefully laid-out trap – over the years – of finally managing to expel the US from the Middle East via a constant war of attrition, slowly bleeding the Empire of Chaos. Eric Margolis has alluded to this possibility here.

At a minimum, the US and some selected allies indeed have been doing Al-Qaeda’s bidding – even though ISIS/IS has split from “historic”Al-Qaeda.

Obama’s “coalition of the willing”, about to fight ISIS/IS/The Caliph, includes Britain, Australia, Qatar, Saudi Arabia, Turkey, Jordan and the United Arab Emirates. No less than five out of these seven happen to be the ones who trained/weaponized/facilitated the “flowers of evil” of ISIS/IS blooming in Syria.

So it’s no wonder the Arab Street is drowning in skepticism about who’s really running the ISIS/IS show. It can’t be Abu Bakr al-Baghdadi, a.k.a Caliph Ibrahim, all by himself. How come The Caliph, out of the blue, crosses the desert with a skilled, full-fledged army crammed with advanced artillery to capture a territory larger than the UK?

Meanwhile, the powerful House of Saud’s PR lobby is absolutely monolithic; Wahhabism – which has been boosting/funding fanatics worldwide since the early days of the anti-Soviet jihad in Afghanistan – is simply not to be blamed for what The Caliph has been up to. And yet it’s Saudi ideology which ultimately spawned the Frankenstein Caliph leading the freak sons of the Syrian “revolution”. 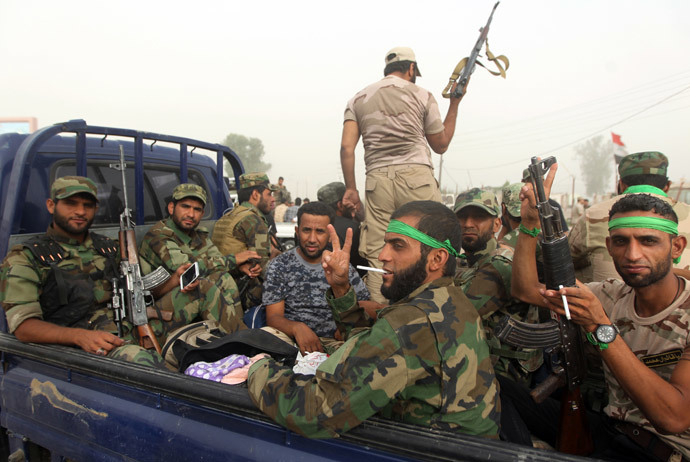 Show me the money

ISIS/IS is a formidable machine oiled by all forms of extortion, kidnapping for ransom, outright bank and jewelry robbery and taxing of residents. But the Holy Grail is definitely oil smuggling.

The Caliph now controls seven oil fields and two refineries in northern Iraq, plus six oil fields in northeastern Syria – extracting, realistically, at least 40,000 barrels a day. They sell all this oil at a cut-rate $25 to a maximum of $60 a barrel. Brent crude, as a comparison, is currently over $100 on the London ICE Futures Europe exchange.

The Caliph is making roughly $2 million a day, and everything paid for in cash or bartered goods. No one knows who’s buying from the Islamic State’s complex distribution network of middlemen, but the fact is the oil flows from Caliph-controlled “Syraq” to Turkey and Jordan.

Being so flush, no wonder The Caliph’s armies are heading towards Aleppo; they are less than 50 km away, and could soon easily take over some eastern suburbs.

The Obama administration, meanwhile, prefers to excel at sanctioning Russia. If they were really serious at targeting The Caliph, they’d be following the money, deploying local intel to track where the money actually is (certainly not in a bank). Instead, all the rhetoric in the Beltway is about more bombing of – another historical irony – made in USA hardware left behind by the Iraq army; more drones; and eventually, more “boots on the ground”.

The “known known” – to quote Donald “Rummy” Rumsfeld – in the Beltway “debate” is that for the CIA and the Pentagon, fighting The Caliph is the absolutely perfect excuse to eventually impose regime change in both Iraq and Syria.

Washington has already got regime change-lite in Baghdad. The CIA and the Pentagon are thinking in terms of We bomb The Caliph/Caliph fights Assad/Hezbollah gets involved/Divide and Rule and More Chaos/We bomb a little to the side/Assad falls.

It won’t work, though. Washington thought – until the capture of Mosul – that The Caliph was under control. But he has a mind of his own – and a lot of cash still flowing from powerful Saudi and Kuwaiti backers, apart from the oil smuggling. The Caliph dreams of being intimately involved in the House of Saud’s succession, and even making a play for power himself.

I’m a better serial killer than you

The Islamic State is a product of gruesome Tawhid & Jihad (“Monotheism and Holy War”), led by Jordanian serial killer Abu Musab al-Zarqawi, incinerated by a US missile in 2006. Zarqawi had pledged allegiance to Osama in 2004, and renamed his outfit Al-Qaeda in Iraq (AQI). After he died, AQI turned into Islamic State in Iraq (ISI).

It took years for his successor, Ibrahim al-Badri, a.k.a. Abu Bakr al-Baghdadi, a.k.a. Caliph Ibrahim to turn ISI into ISIS (adding the Levant) and trying to absorb Al-Qaeda’s Syrian franchise, Jabhat Al-Nusra.

Al-Zawahiri, for his part, didn’t like these shenanigans one bit. He insisted Jabhat al-Nusra was the real jihadi deal. Al-Baghdadi got a dressing down; fight in Iraq, not Syria. Bad move – al-Baghdadi ended up telling al-Zawahiri to stuff it. 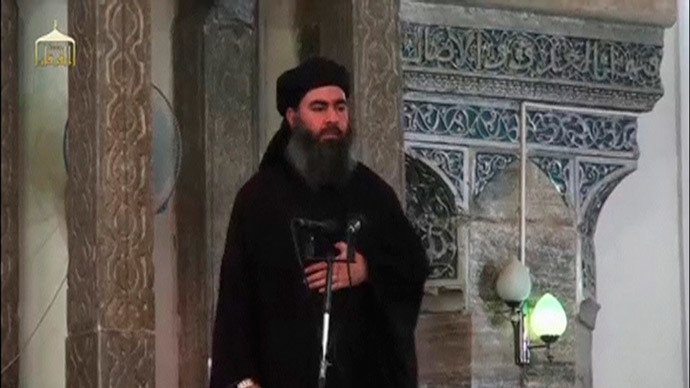 Thus the myth was born that ISIS/IS is way more hardcore than Al-Qaeda – a sterling PR move by The Caliph to bolster his and his outfit’s charisma. For the multinational Google Jihad generation, if the grand mufti of Egypt, the grand mufti of Saudi Arabia, and the Organization of Islamic Cooperation (OIC) all dismiss ISIS/IS, that’s because it’s the real deal. And it’s wealthy, armed to the teeth and rules over a vast territory. It is reducing the Sykes-Picot agreement to dust.

So yes, The Caliph is indeed implementing Osama’s trap – in his own way. Zarqawi tried to implement it. And Zarqawi is the predecessor of al-Baghdadi. But that’s only part of the story.

The real juice is how The Caliph has now legitimized the Global War on Terror (GWOT) for “decades”, in British Prime Minister David Cameron’s words. The indefatigable “senior US military officials” have gone on red alert, warning that ISIS/IS will soon “threaten” the US and Europe. The Caliph is the new Osama.

And this only just a year after Obama – armed with his self-imposed red line – was about to bomb Syria because “Assad must go” had “gassed his own people.” And the ones who actually talked Obama out of this insanity were none other than Russian President Vladimir Putin and Foreign Minister Sergei Lavrov – now demonized with a vengeance by the Empire of Chaos.

Hollywood couldn’t come up with a more far-fetched script. Deep in the bowels of a palatial abode in “Syraq”, one can distinctly hear the sound of The Caliph laughing.