Leaving Democracy to the Experts

Slavoj Žižek – In These Times 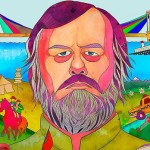 The key decisions concerning our economy are negotiated in secrecy, out of our sight, with no public debate. And such decisions set the coordinates for the unencumbered rule of capital.

On June 19, the second anniversary of Julian Assange’s confinement to the Ecuadorian embassy in London, WikiLeaks rendered public the secret draft text for the Trade in Services Agreement (TISA) Financial Services Annex. The document was classified not only during TISA negotiations, but for five years after it enters into force.

While the TISA negotiations have not been censored outright, they have been barely mentioned in the media— a marginalization and secrecy that are in stark contrast with the world-historical importance of the TISA agreement. TISA would effectively serve as a kind of legal backbone for the restructuring of the world market, binding future governments regardless of who wins elections and what the courts say. It would impose a restrictive framework on public services, making it more difficult both to develop new ones and protect existing ones.

Is this discrepancy between politico-economic importance and secrecy really surprising? Is it not rather a sad but precise indication of where we in Western liberal-democratic countries stand with regard to democracy? A century and half ago, in Das Kapital, Karl Marx characterized the market exchange between worker and capitalist as “a very Eden of the innate rights of man. There alone rule Freedom, Equality, Property and Bentham.” For Marx, the ironic addition of Jeremy Bentham, the philosopher of egotist utilitarianism, provides the key to what freedom and equality effectively mean in capitalist society. To quote The Communist Manifesto: “By freedom is meant, under the present bourgeois conditions of production, free trade, free selling and buying.” And by equality is meant the legal formal equality of buyer and seller, even if one of them is forced to sell his labor under any conditions, like today’s precarious workers. Today, freedom means the free flow of capital, as well as of the financial and personal data (both flows guaranteed by TISA). But what about democracy?

The main culprits of the 2008 financial meltdown now impose themselves as experts who can lead us on the painful path of financial recovery, and whose advice should therefore overcome parliamentary politics. Or, as former Italian prime minister and EU technocrat Mario Monti put it: “If governments let themselves be fully bound by the decisions of their parliaments without protecting their own freedom to act, a breakup of Europe would be a more probable outcome than deeper integration.”

Which, then, is the higher force whose authority can suspend the decisions of the democratically elected representatives of the people? As early as 1998, the answer was provided by Hans Tietmeyer, then the governor of the Deutsches Bundesbank, who held up “the permanent plebiscite of global markets” as superior to the “plebiscite of the ballot box.” Note the democratic rhetoric of this obscene statement: Global markets are more democratic than parliamentary elections, since the process of voting goes on in them permanently, rather than every four years, and globally, rather than within the limits of a nation-state. The underlying idea: When separated from this higher control of markets (and experts), parliamentary-democratic decisions are “irresponsible.”

This, then, is where we stand with regard to democracy. The TISA agreements are a perfect example. The key decisions concerning our economy are negotiated in secrecy, out of our sight, with no public debate. And such decisions set the coordinates for the unencumbered rule of capital. This severely limits the space for the decisions of democratically elected political representatives, leaving the political process to deal predominantly with issues toward which capital is indifferent, like the outcome of cultural wars.

Consequently, the release of the TISA draft marks a new stage in the WikiLeaks strategy. Until now, its activity has focused on making public how our lives are monitored and regulated by intelligence agencies of the state—the standard liberal concern of individuals threatened by oppressive state apparatuses. Now, another controlling force appears—capital—that threatens our freedom in a much more twisted way, perverting our very sense of freedom.

Since our society elevates free choice into a supreme value, social control and domination can no longer appear to be infringing on subject’s freedom. Un-freedom, then, is cloaked in the guise of its opposite: When we are deprived of universal healthcare, we are told that we are given a new freedom to choose our healthcare provider; when we no longer can rely on longterm employment and are compelled to search for a new precarious work every couple of years, we are told that we are given the opportunity to reinvent ourselves and discover new unexpected creative potentials that lurked in our personality; when we have to pay for the education of our children, we are told that we become “entrepreneurs of the self,” free to invest in our own—and our children’s—personal growth and fulfillment.

Constantly bombarded by these imposed “free choices,” forced to make decisions for which we are mostly not even properly qualified or informed, our “freedom of choice” increasingly becomes a burden that deprives us of true freedom of choice—the choice (or rather, decision) to move eyond market-freedom into the freedom of collectively organizing and regulating the process of production and exchange. It is more and more becoming clear that only in this way will humanity be able to cope with antagonisms that threaten its very survival (ecology, biogenetics, “intellectual property,” the rise of the new class of those excluded from public life).

Perhaps this paradox throws a new light on our obsession with the ongoing events in Ukraine—events extensively covered by the media, in clear contrast to the predominant silence on TISA. What fascinates us in the West is not the fact that people in Kiev stood up for the mirage of the European way of life, but that they—seemingly, at least—simply stood up and tried to take their fate into their own hands. They acted as a political agent enforcing a radical change—something that, as the TISA negotiations demonstrate, we in the West no longer have the choice to do