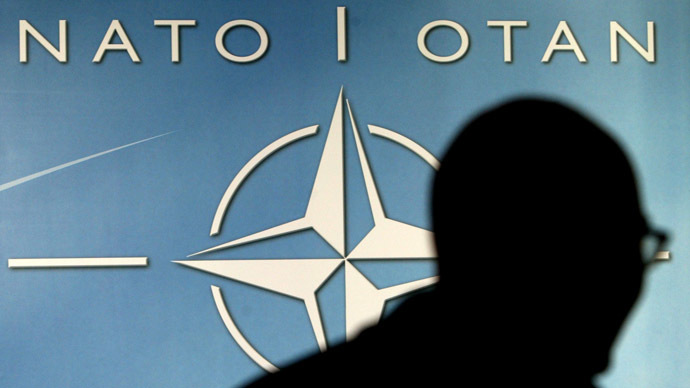 When the show seemed set for NATO to save Ukraine and Western civilization – at least rhetorically – from that evil empire remixed (Russia), the Caliph intervened with yet another “off with their heads” special.

And then, out of the blue, the Caliph proclaimed to the whole world his next target is none other than Russian President Vladimir Putin. Was he channeling another Western darling, the recently ostracized Bandar Bush?

If it were a thesis, everything could be settled as follows: the Caliph becomes a contractor to NATO; the Caliph beheads Putin; the Caliph quickly liberates Chechnya (not the usual, deeply embarrassing NATO quagmire in Afghanistan); the Caliph, on a roll, attacks the BRICS countries; the Caliph becomes NATO’s shadow secretary-general; and Obama finally stops complaining that his calls to Putin always end up on voicemail.

Ah, if only geopolitics was as simple as a Marvel Comics blockbuster.

Instead, the Caliph should know – even as he is largely a Made in the West product, with substantial input from GCC petrodollar cash – that NATO never promised him a rose garden.

So, predictably, the ungrateful Obama/Cameron duo – oh yes, because the “special relationship” is all that matters in NATO, the others are mere extras – have vowed to go after him with a broad, well not that broad “coalition of the willing”, with the usual suspects bombing Iraqi Kurdistan, parts of Sunni Iraq and even Syria. After all, “Assad must go,” rather “Assad brutality,” in Cameron’s formulation, is the real culprit for the Caliph’s actions.

And all in the name of the enduring freedom forever-style GWOT (“Global War on Terror”).

Get me to the Slavic Caliph

NATO’s outgoing secretary-general Anders “Fogh of War” Rasmussen was somehow rattled. After all, this was supposed to be the “crucial moment,” at the Wales summit, when NATO would be at its Cold War 2.0 best, rescuing “the allies,” all 28 of them, from the dark gloom of insecurity.

One just had to look at the replica of a glorious eurofighter Typhoon parked in front of the NATO summit hotel in Newport, Wales.

To round it all off, that evil Slavic Caliph, Vlad himself, designed a seven-point peace plan to solve the Ukrainian quagmire – just as Kiev’s appalling army has been reduced to strogonoff by the federalists and/or separatists in the Donbass. Ukrainian President Petro Poroshenko – who until virtually yesterday was screaming “Invasion!” at the top of his lungs – breathed long sighs of relief. And as an aside, he disclosed Kiev was receiving high-precision weapons from an unnamed country that could only be the US, the UK or Poland.

The whole thing posed a problem, though. What is NATO to defend Western Civilization from when all that threat embodied by “Russian aggression” dissolves into a road map to peace?

No wonder the 60 heads of state and government, with their Ministers of Defense and Foreign Relations, who performed a soft invasion/breaching of the “ring of steel” protecting Newport, Wales, from protesting hordes were also somehow dazed and confused.

Old and New Europe all over again

Over eleven years after Shock and Awe, we are still living in a Rumsfeldian world. It was the former Pentagon head under Dubya who conceptualized “Old Europe” and “New Europe”. “Old” were Venusian sissies; “New” were vigorous Martians.

“New” totally supported Shock and Awe, and the subsequent invasion/occupation of Iraq… Now they support, in fact beg, for NATO to stare down Russia.

“Old”, for its part, was trying at least to save a negotiating space with Putin. And in the end was rewarded with the Putin peace plan.

Just in case, not to rattle the Empire of Chaos too much, Paris announced it won’t deliver the first of two Mistral helicopter carrier battleships to Moscow according to schedule.

And of course NATO strongly condemned Russia on Ukraine, and the EU followed up with yet more sanctions.

As for Fogh of War, predictably, he kept juggling his Mars Attacks! rhetoric. It was all Moscow’s fault. NATO is nothing but an innocent force of appeasement – powerful and solid. At the same time NATO would not be foolish to start depicting Russia as an enemy outright.

So NATO, as predicted, at best will help train Kiev’s forces; the Donbass performance showed they badly need it. But there will be no Ukraine “integration” – for all the hysteria created by Kiev as well as Poland and the Baltic states calling for permanent bases. The new element will be the remixed NATO Response Force (NRF) which, by the way, was never used before.

NRF even comes with a catchy slogan: “Travel light and strike hard”. An 800-strong battalion will be able to strike in two days, and a 5,000-strong brigade between five and seven days. Well, by those “travel light” standards it would hardly be enough to prevent the Caliph from annexing larger parts of Jihadistan with his gleaming white Toyota combo. As for “strike hard”, ask Pashtuns in the Hindu Kush for an informed opinion.

So Wales yielded: the NATO Response Force; permanent “rotation” and permanent forward bases to “protect” Central and Eastern Europe; and everybody shelling out more cash (no less than 2% of their GDP each, for all 28 members, from here to 2025). All this in the middle of the third European recession in five years!

Now compare the astonishing combined NATO military budget of $900 billion (75 percent of all expenses monopolized by the US) with only $80 billion for Russia. Yet Moscow is the “threat”. 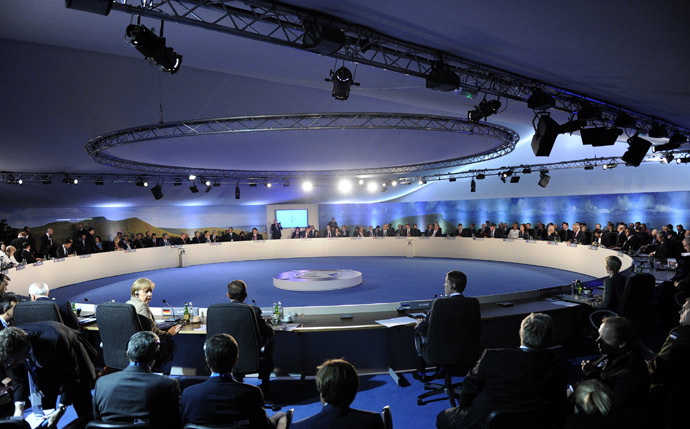 A general view shows the round table during the NATO-Ukraine meeting at the NATO Summit at the Celtic Manor Resort in Newport, Wales, September 4, 2014. (Reuters)

Needless to add, even with so much sound and fury, Wales did not see NATO sitting on a Freudian divan – analyzing in an endless monologue its abject failure in both Afghanistan and Libya.

In Afghanistan, the Taliban basically run rings around NATO’s bases and “strike hard” movements, demoralizing them to oblivion. That was NATO in GWOT mode.

And in Libya NATO created a failed state ravaged by militias and called it “peace.” That was NATO in R2P (“responsibility to protect”) mode.

The Caliph is not exactly quaking in his ‘made in USA’ desert boots. He’s certainly getting good intel from his Chechen “rebel” military commander – and even dreaming of taking on the Slavic Caliph himself. How come Marvel Comics never thought about that?