‘Peaceful coexistence and collaboration’ of religions highlighted on one-day trip. 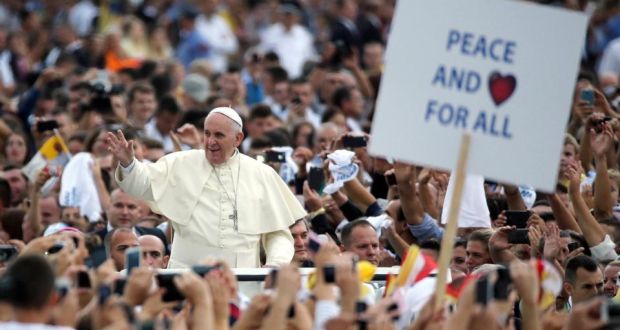 Pope Francis waves as he arrives in Tirana for his one-day pastoral visit to Albania. Photograph: Alessandro Bianchi/Reuters

21 Sep 2014 – Pope Francis has explained in Tirana why he chose Albania for the first European visit of his pontificate.

In a homily in Tirana’s central Mother Teresa square, the pope paid homage both to the past sufferings and to the present achievements of multi-ethnic Albania, a country which represents nothing if not the “periphery” of both the Catholic faith and recent European experience.

Speaking to a rain-soaked 200,000-strong crowd, the pope recalled the horrors of the country’s 40-year dictatorship under the leadership of hardline Stalinist Enver Hoxha. “Recalling the decades of atrocious suffering and harsh persecutions against Catholics, Orthodox and Muslims, we can say that Albania was a land of martyrs: many bishops, priests, men and women religious, and laity paid for their fidelity with their lives…”

When the pope made reference to the cemetery of Scutari, infamous for being the place where many Catholics were executed by the Hoxha regime, the crowd broke into sustained applause. “I stand spiritually at that wall of the cemetery of Scutari, a symbolic place of the martyrdom of Catholics before the firing squads, and with profound emotion I place the flower of my prayer and of my grateful and undying remembrance,” he said.

Throughout his speeches during the one-day trip, the pope also underlined the fact Muslims, Orthodox and Christians peacefully cohabit in today’s Albania, a 60 per cent Muslim majority country of 3 million people, where Catholics number 350,000.

Speaking to Albanian president Bujar Nishani on his arrival in Tirana this morning, Pope Francis said: “There is a rather beautiful characteristic of Albania, one which is given great care and attention, and which gives me great joy: I am referring to the peaceful coexistence and collaboration that exists among followers of different religions.

“The climate of respect and mutual trust between Catholics, Orthodox and Muslims is a precious gift to the country.”

Today’s events are being held amid tight security. Fifty sharpshooters were on the roofs of the imposing ministerial-type buildings which dominate a square named after one of Albania’s most famous daughters, the missionary saint, Mother Teresa, an ethnic Albanian. With many travelling from neighbouring Kosovo and Montenegro to attend the Mass, Albanian police were tightly controlling the border.

Given that just one week ago Iraq’s ambassador to the Holy See, Habeeb Al Sadr, warned of an attempt on the life of the pope by Islamic fundamentalists, police were cautious about those travelling from Kosovo and Montenegro.

There have been reports recently of small numbers from both countries joining the ranks of Islamic jihadists.

Before reciting the Angelus, the pontiff prompted more applause when repeating that he wanted to offer encouragement to Albanians, saying: “All those young people at the airport this morning… to them, I say… learn to say no to the idolatry of money, to false individual freedoms, to addictions and to violence.

“Instead say yes to the culture of dialogue and solidarity… That way, you will build a better Albania in a better world.”